The Law and the Glorious Gospel

The Law and the Glorious Gospel

In this letter, Paul is writing to Timothy - a young man who has been left in Ephesus to pastor and lead the growing church there. And Paul immediately reminds Timothy of the charge that was given to him: to confront a group of false teachers in church and command them to stop teaching false and destructive teachings which have potential of diverting people away from gospel of Jesus Christ.

Don't have an exact snapshot of who they are or what they were teaching - but Paul characterizes it as myths and genealogies - false teaching that instead of promoting God's work was promoting speculation and controversy in the church.

Desiring to be teachers of the law

We don't know exactly what they were teaching about the law - again, Paul doesn't tell us. But what we do know is that they were taking something good - the law - and using it in such a way that that good thing became a dangerous thing. They were using the law unlawfully. This begs the question: how do we use the law usefully?  How do we use the law in the way that God (who gave the law) intended?

I.  The law was not given to achieve right standing with God through obedience to the law

The law was not laid down for the just...

First of all it makes sense: God gave the law so we would know how to obey God and please Him through our obedience. I don't mean that everyone has the law of Moses memorized and is zealously trying to keep all those laws. Some do. Most of us just have some vague standard of what God expects - basically we think that whatever standard we are able to keep is the same standard that God sets.

In Super Bowl 34 - just 8 years ago - in what has been called the second greatest moment in Super Bowl history, the game came down to one last play. The Tennessee Titans were down one touchdown to the St. Louis Rams and had the ball on the 10 yard line. Quarterback Steve McNair threw the ball to wide receiver Kevin Dyson who caught it on the five yard line and as he made a straight line for the end zone was tackled by Rams linebacker Mike Jones. Dyson fought and stretched to reach end zone with football but came up one yard short. One yard short! All that work and all that was at stake - to come up one yard short.

But what if Dyson came out with spray paint and painted the end zone line where the ball landed. Then he wouldn't have come up short with ball - the ball would have been exactly where it needed to be - because line was moved to meet the ball.

Carry that out. Tonight the Giants play the Green Bay Packers in NFC Championship Game. What if on first drive Giants begin their drive on 20 yard line, and get stopped after gaining only 8 yards after 3 downs, but rather than punt the ball back to the Packers, Eli Manning comes out and with paint moves the end zone line back to the Giants 28 yard line.

It sounds ridiculous and it is. But the point is: if the standard is moved to wherever the ball is, there is no standard. God has, in the law, set His perfect and holy standard and it is impossible for any person to perfectly obey it. We don't even come close. So we come out with paint and move the standard to wherever our lives are. We say...

...but for the lawless and disobedient, for the ungodly and sinners, for the unholy and profane...

Paul lists a list of sins - a list that mirrors the ten commandments except the tenth about coveting, but then spreads the net to catch anything he missed: and whatever else is contrary to sound doctrine, in accordance with the glorious gospel of the blessed God...

The law reveals our sinfulness - it reveals that we are all sinners by God's standards. It gives an absolute measurement between where the end zone is and where we have downed the ball. We're not even close!

The bible tells us that those who break the law - even in one point - are under the wrath of a holy God whose perfect standard we have violated. If we do not perfectly keep the law in every bit including in the heart, our sin must be judged - the wages of sin is death. Eternal death. That is a lawful and necessary use of the law - to reveal our sin and danger.

A lot of non-Christians I have met seem to assume that they're ok with God. Whatever their standard is, they feel secure that God accepts their standard. They have no sense of danger or of their need for salvation.

A lot of evangelism has adopted the approach that rather than share anything negative about people, we are to sell Jesus as being the best thing for their lives. We can mention sin generally, but not specifically - that might offend and make them feel bad.

The law was given to reveal our sin and our urgent need for salvation from God's coming wrath.

I still feel horror when I think of the terrible tsunami of December 2005. Hundreds of thousands of people died in overwhelming power of that day. One image sticks with me from video is of a quiet beach where the water had gone out and people were peacefully milling about. When they saw a crest of whitewater it was an object of fascination to them.

If we were on that beach that day and we knew what was coming, our duty would be to warn people: run for your lives! What if someone came along and said, "that's too negative a message. Tell people that there are free cheeseburgers and ice cream sundaes being served on third floor of the hotel up the beach. Encourage them that they would be happier if they took advantage of that deal."

The law warns us that God will eternally punish all those who break His law. If you have broken one law - you are guilty of breaking them all. But folks, we are sinners and we break God's law all the time. The tsunami is coming!

The wrath of God is like great waters that are dammed for the present: they increase more and more and rise higher and higher till an outlet is given...If God should withdraw His hand from the floodgate it would immediately fly open, and the fiery floods of the fierceness and wrath of God would rush forth with inconceivable fury and come upon you with omnipotent power. ~ Jonathan Edwards[1]

It is more than unpleasant - the biblical truth of the coming fury of God against those who have broken His law is horrifying. People need to know is that there is a tsunami coming. The law convicts us of our sin and reveals our danger before God's wrath.

This gets us back to why Paul is so urgent about his charge to Timothy: false teachers are unlawfully using the law and swerving themselves and those who follow them  away from the gospel that was entrusted to Paul. The law isn't the final say, the gospel is.

...in accordance with the glorious gospel of the blessed God with which I have been entrusted.

The law reveals our sin and danger, not to make us try to obey God harder, or reduce us to hopelessness, but to make us aware we need to be saved. We need a Savior. The law drives us to Jesus Christ, who, while He lived on earth, kept the law perfectly and obeyed His Father perfectly in every word, thought, deed.

To use a sensitive illustration. Today is Sanctity of Life Sunday. Suppose there is a woman here this morning - and there may well be - who has had an abortion in her past. Her heart is burdened to point of breaking with guilt and shame about that choice. I have met women who have shared that kind of heartache.

What can relieve that heartache and sense of guilt? If such a woman tries to relieve her guilt by telling herself that it wasn't a baby, that it isn't wrong, that it's her choice, that guilt is an old fashioned bondage to a repressive puritan morality - she will not find true relief for her guilt. She is moving the end zone to where she has the ball. God is the Judge and He has said that murder breaks His law and will be punished.

If that woman comes to the Savior for mercy and forgiveness - believing that His death covers even the sin of abortion - she will find a fountain of mercy and true relief. That is the glory of the gospel of Jesus Christ and it's true for every sin we could ever commit.

In the next verses, Paul will tell his own story and it will be filled with the mercy and grace of the Lord Jesus Christ. The law drives us to our Savior!

IV. The glorious gospel does not do away with the Law, but rather writes it on our hearts and gives us power to obey the Law

That grace not only saves us, but by grace (the Holy Spirit) we are empowered to obey God's law. The law told us what we needed to do, but gave us no power to do it. Grace, after saving us, empowers us to please God by obedience.

In John Bunyan's allegory Pilgrim's Progress, Christian is in the home of the Interpreter and there he sees a room full of dust. Thick dust lay on floor for it had never been swept. Interpreter asks a man to sweep room and as he does, room fills with dust to point of choking Christian. Only when a young woman comes and sprinkles water on the floor and dust can it be swept up without difficulty.

Dust is the sin of our sin filled hearts. The Law is the broom, when it tries to clean, it only raises up dust and stirs it up more. The law revives our sin, and causes us to want to sin more. Only when the water of grace is sprinkled on our hearts can we begin to obey the law - not because we have to, but because our hearts have been changed to want to. That is the power of the gospel.

And gives me neither feet nor hands

It bids me fly and gives me wings! - - John Bunyan

If you are not a Christian I would urge you to consider this: you are a lawbreaker. It doesn't matter whether you feel danger or not, God will judge all sin. All sin. When a person turns to Jesus Christ and trusts in Him as their Savior, they find their sin has been judged and Christ took the judgment, and they are safe.

[1] Jonathan Edwards, Sinners in the Hand of An Angry God, from "The Wrath of Almighty God" pg. 71 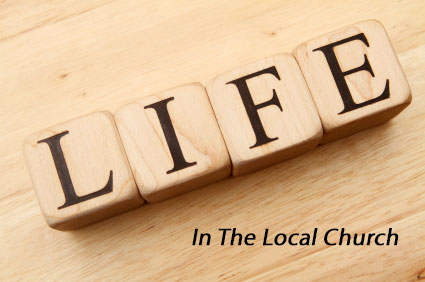 More in Life in the Local Church

A Christian's View of Riches