The Lord is My Shepherd (text)

The Lord is My Shepherd

I know this psalm is most often associated with comforting those who are "walking through the valley of the shadow of death". It was the last scripture I read to Arland Martin before he passed away this past October.

But it's not just a psalm for the dying. It is a psalm for the living - and I believe that as we stand on the edge of a brand New Year, this psalm has a timely call for us to grow in our trust and followership of Jesus as our Shepherd in the days that lie ahead.

This is a psalm written by David probably after he became king of Israel, but no doubt he was remembering the days when he was just a shepherd boy tending sheep in the fields under the open skies. As he thought back on those days and how he cared for his sheep, providing for them and protecting them from danger, he saw that God was his shepherd and cared for and protected him in the same way.

In the New Testament we see that David was speaking of Jesus. Jesus is called the chief Shepherd (1 Pet 5:4)- the great shepherd (Heb 13:20) and Jesus calls himself the Good Shepherd (Jn 10).

So Jesus is the Good Shepherd and theologically every Christian can say the Lord is my Shepherd. But I think we know that in experience this can be more or less true in our lives. David was a real man writing from real experience - this isn't simply conceptual musings going on here, this is a guy who knew from experience that life isn't predictable, that it has twists and turns. Get anointed by God to be the next king, and before you know it, you're a fugitive running for your life. But in the midst of all these unpredictable twists and turns, this is what David knows: the Lord is my Shepherd. Not just a shepherd. My Shepherd.

Life is not predictable for us either. Who knows what 2009 holds in store? I'm not going to make any predictions other than what we know from God's word. But the important question isn't, is life going to zig or zag in 2009? The important question is: is the Lord my Shepherd? Experientially? Am I trusting His leadership? Am I following His leadership?

Another way to ask: am I His sheep? Am I acting like His sheep? Listening for His voice?

When David says, The Lord is my shepherd, he's also saying he is the Lord's sheep. And as a shepherd, David knew that it was no compliment to be called a sheep.

Sheep are dumb, weak, and helpless!

Sheep really need a shepherd because they are dumb and weak and helpless. They aren't vicious, can't defend themselves, they aren't fast to escape, and they aren't smart -on their own they die. There's actually a website (put out by cows I think) that has several videos explaining why sheep can't do PR. It's true - sheep have an image problem. Nothing is ever named after sheep. Ever hear of a car named "The Sheep"? You've got Jaguars, and Mustangs and Cougars, but no Sheep. Even their cousins won the PR war - that's why the Dodge pickup isn't "Built sheep tough".

Same with sports teams. You got the Jackals, the Bengals, the Tigers, the Bulls- no sheep. Accident? I think not. Would the Detroit Lions play the same if they were called the Detroit Sheep? (Maybe). Again, their cousins won the PR war - so you've got the St Louis Rams rather than the St Louis Lambs.

So here's David, a mighty king, calling himself a weak, dumb and helpless sheep. Yet it doesn't really fit - there might be people who are really dumb, weak and helpless, but David wasn't. He was very intelligent, a fearless man and a strong leader. But he was a humble man who depended on the Lord for his wisdom and strength. He wasn't self-sufficient, he depended on God's sufficiency for his life.

predict exactly how 2009 will pan out or how it will affect any of us. If our trust is in the economy or our job or our savings, then we have good reason to be anxious. But our trust is never supposed to be in those things but in the Lord. David's faith is in the Lord his Shepherd, and therefore he can confidently say: I shall not want.

We have seen over and over again the Lord graciously provide for brothers and sisters in need here in this church. For some the day after they found out their job was being eliminated, they received a call offering them a job. Others have had to wait for months for the Lord to provide the next step - but He always did. The Lord is my shepherd, I shall not want. We can know the Lord will provide for all our needs (not greeds).

But there is a deeper want and a deeper provision in mind here: want of the soul. The body can be well fed and the soul be starved or barren or fearful or depressed.

There are times when I'm talking to someone about what's going on in life, ask "how's your soul?" It's not always easy to put into words or quantify, but when our souls aren't doing well, we know it.

Just as a sheep cannot lie down when it's agitated or fearful so when our soul is not doing well we can't enjoy any of the other blessings God gives either. Hands down the greatest destroyer of the soul is sin.

Philip Keller in his book, A Shepherd Looks At Psalm 23 makes this observation:

Sheep are notorious creatures of habit. If left to themselves they will follow the same trails until they become ruts; graze the same hills until they turn to desert wastes; pollute their own ground until it is corrupt with disease and parasites. Many of the world's finest sheep ranges have been ruined beyond repair by over-grazing, poor management and indifferent or ignorant sheep owners.

This is a picture of the paths of sin we would choose if left to ourselves. Sin always leads to barren places - always. Our sinful hearts choose the desert wastes and polluted ground with all its diseases and parasites when we lead ourselves. It is only a testament to the power of sin to blind us to the stupidity of these paths that we think we're chasing something worth having.

The Good Shepherd leads us to green pastures and still waters - the Word of God and quiet communion with God. He leads us off the paths of sin and in paths of righteousness for His name's sake. Purely by grace He leads us to a place where our souls are restored. He restores my soul.

Maybe there's a person here this morning - standing on the edge of a path know is a sinful choice. Looks sweet from where you stand. Know its wrong, know in the end it will do great damage, but from where you are standing it looks so good and you don't feel like you have the power to turn away and choose the right path. Don't try to choose the right path on your own- choose the Shepherd, draw near to Christ and He will lead you in paths of righteousness for His name's sake.

Resolved: to follow the Lord Jesus' leadership more closely in 2009

Following the Lord does not mean a life free from all dangers, hardships or even evil. The Shepherd will in fact lead us to walk through valleys - even one day through the valley of the shadow of death.

We will walk through valleys that have evil - David never says there won't be evil, he says he will fear no evil - for the Lord is with him. There will be enemies, according to verse 5, but the Lord will set out a feast before him. It's not the absence of these bad things but the presence of the Lord that gives David his peace.

There were times when our children (when they were younger and Matthew still on occasion) would wake up frightened in the middle of the night. Maybe a bad dream, maybe they heard a sound. Climb into bed with us. Being with mommy and daddy was all it took to calm their fears. What seemed scary in a dark room alone was no longer scary in room with his parents. We were with them.

None of us can predict what this year holds, but for some of us it might hold some valleys we don't see right now. You might be in a valley right now and looks pretty certain you will continue to be in that valley in 2009. Won't be in the valley forever - it says even though I walk through - no stopping, no making permanent residence in the valley. If following the Shepherd you are walking through and will come out on the other side.

Trust in the Lord - whatever your situation. He will defend us with His rod; He will guide us by His staff. Even the deepest valley - valley of the shadow of death isn't so bad. Christ has taken the sting out of death - only the shadow remains. Spurgeon writes:

Nobody is afraid of a shadow, for a shadow cannot stop a man's pathway even for a moment. The shadow of a dog cannot bite; the shadow of a sword cannot kill; the shadow of death cannot destroy us. Let us not, therefore, be afraid. [1]

Resolved: to trust the Lord's leadership in 2009

III. The Lord pursues us with good things (vv.6)

I think it's interesting that goodness and mercy are following David, rather than David following goodness and mercy. We often run into our greatest problems when we're chasing things we think will be good for us without consulting the Lord's will. Got the order reversed.

What is David following? The Shepherd. As the course of his life is determined by the Lord, that course is good and David is being pursued by goodness and mercy.

I do not believe the economic woes and tremors going on should have Christians looking for bunkers to hide in - if anything it is a time when we can point to the only thing that is eternally stable - Jesus Christ.

In the end, life is not a destination; it's not a series of unfortunate or fortunate events. It's not even a journey. It's a relationship.

And this is eternal life, that they know you the only true God, and Jesus Christ whom you have sent. John 17:3 (ESV)

And David knows that the Shepherd will lead him to eternal dwellings where he will be with the Lord forever. That is our hope as well. May we keep an eternal perspective in 2009.

Resolved: to expect good things from the Lord as we follow the Lord in 2009

Expect good things from Good Shepherd as we follow Him. 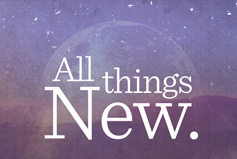 Pressing on Towards the Goal in the New Year

Where Faith and Uncertainty Meet