Be Strong in the Lord (Part One)

One of the great ironies of WWII is that it never needed to happen. When Hitler was still a relatively unknown politician doing jail-time for a failed rebellion, he wrote a book called Mein Kampf (My Struggle) in which he laid out his plans for seizing control of Germany, making an alliance with Italy and Britain, casting off the Versailles Treaty, attacking France and her allies and then finally destroying what he called the “Judeo-Bolshevik” regime of the Soviet Union. It was all there for anyone to read. Hitler’s success in carrying out those plans happened in large part because no one took him very seriously. At least not until it was too late.

Paul doesn’t want Christians to make the same mistake with our enemy the devil. As he comes to the end of this wonderful letter, a letter where he has displayed for us the glorious panorama of God’s sovereign grace in saving us through Jesus Christ, and appealed for us to walk in a manner worthy of the high calling we have received, there is one more thing he wants us to be aware of and take seriously! He wants the believer to know that the Christian is engaged in a spiritual battle. There is a spiritual war going on and the Christian life is a life at war.

Now I know that some may be uncomfortable with that term “spiritual war”. It can conjure up weird, maybe even spooky images. Maybe you’ve met Christians who seem to see demons behind every bush – who are more aware of the devil’s activity than of God’s activity.

If you are new here I want you to know that this is not a church that focuses on the devil. Our focus is on God! We focus on God’s greatness and glory and sovereignty and most of all we focus on His love and mercy and grace as expressed by His sending His Son Jesus Christ to save undeserving sinners like me and you. That is our focus and always will be.

But we don’t want to ignore Satan either. Jesus Christ has won the decisive victory over him at the cross, so Satan is a defeated foe, but he still fights to lead men away from God. The battle isn’t to defeat God – it’s over souls and his desire to obscure men’s vision of the glory of God through sin. Drag them to hell with him and for the believer to destroy our lives or at least neutralize our witness. Even though for the Christian the outcome is assured, we are still in a very real spiritual battle.

Paul in this passage makes three points about our spiritual battle that is worth our taking a few minutes to unpack:

Verse 12 tells us that we don’t wrestle against flesh and blood – in other words we’re not fighting against people. People can be antagonists and be used as tools in the hands of the enemy, but ultimately our fight isn’t antagonists – it’s against spiritual forces of darkness. Remembering that helps protect us from a kind of militancy or combative attitude that is so far from a Christlike attitude. Part of the fight that we are to fight is the fight to love people. Even our enemies. Love that person who insulted you. That person who did you wrong. That person who hurt you. You are to love them. Jesus said we are to love our enemies

In fact our fight isn’t against people but for people! When we think of spiritual warfare, don’t think of us circling the wagons trying to survive the latest onslaught of the enemy. Actually we’re on the offensive fighting for the glory of God and the joy of all people in Christ! We want to see our worst enemy come to a saving knowledge of Jesus Christ and become our brother or sister. That’s our fight – and it’s worth giving our lives to and for. Don’t think huddling defensively – think advancing offensively for the glory of God and the joy of all people. Think mission. Think of Jesus and how he confronted the spiritual powers – not defensively but raiding the strong man’s house. In the strength of the Lord we’re to continue that work. May the Lord give us strength and passion to do that!

When you think of the devil don’t think of a guy in a red suit and a pointy tail with a pitchfork. Think of a cruel, powerful, and intelligent creature who is bent on defaming God and our spiritual destruction.

Paul uses words such as rulers, authorities, cosmic powers, spiritual forces of evil in the heavenly places to convey that Satan is powerful and has authority in this world. When Satan tempted Jesus in the wilderness he offered Jesus the kingdoms of the world if Jesus would bow down and worship him. Jesus refused to bow down of course, but he never denied that Satan had the power to give him the kingdoms.

Satan and his kingdom are not in the same league as God – when demons encountered Jesus there was no cosmic fight, there was a lot of whimpering and begging. But compared to us he is extremely powerful and that is why we must stand in the strength of the Lord if we are stand and overcome.

Not only is the devil a real and powerful foe, but he’s a schemer and a strategizer. Paul warns us to stand against the schemes of the devil (vs. 11). The word denotes a planning, a strategizing, a scheming. Satan is a tactician. We must not be ignorant of his schemes or we can be vulnerable to those schemes and fall.

In the movie Signs, a movie where invading aliens overtake a country farm, there is tense moment when the family is huddled in the basement with the aliens fighting to get inside the room through the door. Suddenly they realize that there’s a lot of noise going on outside the door, but no real effort to get in through the door. The noise is to distract them by keeping their attention on that one point while another vulnerable spot is exploited.

That’s how the devil works – he’s always looking for where we might be vulnerable and how he can get us to fall. We don’t need to be fearful, but we need to be vigilant! Where am I vulnerable? Where am I letting down my guard? Where might seeds be sown that might lead to sin and heartache and damaged testimony down the road?

Thankfully God has given us strong armor to protect our souls and to enable us to stand against the enemy. Paul clearly has the Roman soldier’s armor in mind when he urges the believer to suit up, and notice that the strength and armor is God’s but we still have a responsibility to stand:

I think truth here means two related things: 1) the objective truth that is God’s word. God’s word is a rock of truth – thy word is truth – and its truth protects us from soul destroying error. One of Satan’s greatest strategies is to get us to think wrong things about God and about life. Battlefield is fought in the mind. 2) Also means the putting on of integrity and truthfulness in our lives and character. A lack of truthfulness and integrity in our personal lives will be a serious chink in our armor that will allow the enemy to strike a devastating wound to our souls. If dishonesty or lack of integrity mark our lives it will give the enemy a stronghold from which to do great damage.

But again, this refers to more than the imputed righteousness of Christ – it also refers to our living righteously in the new life He has given us. In Ephesians 4:24 Paul tells us to put on the new man created after God’s likeness in “true righteousness.” We have received righteousness through faith in Christ, but we are also to walk in righteousness by the empowering grace of God.

These first two pieces of armor remind us that the enemy attacks us through sin. He loves the darkness of

I heard someone once say that if you allow a lot of garbage to pile up in your home, you’re gonna have flies. And if you want to get rid of the flies, you don’t do it by studying the flight patterns of flies and figuring out creative ways of killing flies. You do it by getting rid of the garbage!

Spiritual warfare isn’t a matter of studying the flight patterns of demons – it’s a matter of taking out the garbage. Paul is saying, put on the armor of a garbage free life. Live in truth. Live in righteousness. Filth of lies and deceit and unrighteous immorality and shameful living will give a breeding ground for the work of the enemy.

One of the ways we do warfare is by bringing the gospel of peace with God to everyone around us. Love

this picture because again it moves us out of the “circle the wagons” mentality to a proactive proclamation of the gospel as a means of doing violence to the enemy’s kingdom.

So in Acts 26:18 Paul tells how Jesus told him he was sending him to preach the gospel in order to: …open their eyes, so that they may turn from darkness to light and from the power of Satan to God, that they may receive forgiveness of sins and a place among those who are sanctified by faith in me.”

When you or I share the gospel with someone we are advancing the kingdom of God against the kingdom of Satan. When a soul turns in faith and repentance to Jesus Christ, there is no greater damage that can be done to the kingdom of darkness! And be prepared, the enemy won’t like it!

What does the war look like on beautiful days?

Share four thoughts to help understand how a war against dark powers can go on on bright days.

¨       Spiritual warfare is a fight for our soul to know and love and trust and treasure Jesus Christ above all else in this whole world, so while we are grateful for the beauty in this world, it only points us to hunger more for the One who created it all! Our hearts sinfully want to love the creation more than the creator and spiritual warfare is a fight for loving, treasuring and savoring our Savior above everything in the world!

¨       Spiritual warfare is a fight against a selfish life. Even when all seems well in our world, the desire to declare “peace in our time” is a selfish desire. There are so many around us who are hurting and desperate and lonely and needing the strong hope that the gospel gives – and we need to fight the selfishness that would not care about them..

¨       Finally, spiritual warfare is a fight for a heart that is willing to risk our comfort and peace for the 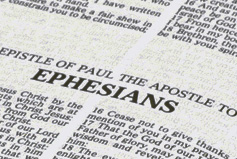 Glorifying God in the Workplace