You Shall Call His Name Jesus

You Shall Call His Name Jesus

I am one of those who think that Christmastime is a great time of year! Some of my warmest memories growing up are around Christmas – presents under the tree, Christmas carols, family gatherings, snow on Christmas day, candlelight services, the Christmas story of the Savior born in a manger. Our family has our own Christmas traditions: every year we watch It’s A Wonderful Life and every year I’m moved to tears as George Bailey is surrounded by friends and Clarence finally gets his wings. And every year the first thing we do as a family on Christmas morn (after Janice and I get our coffee) is read the Christmas story from Luke.

But, if we were honest I think many of us would admit that there is a sense of emptiness that can creep into the season as well. I was walking up to Wal-Mart a couple of weeks ago and there was a Salvation Army bell ringer and he happened to have had Christmas music playing on a CD player and as I walked up I think it was the song It’s the most wonderful time of the year playing and it just hit me that no one seemed to look like it was the hap-happiest time of the year. Everyone looked kind of miserable, actually. Maybe Wal-Mart just has that affect on people!

But what I was feeling, and have been feeling since, is that there is a kind of soul-weariness that has crept into the holiday for many. Christmas has been so overrun by long lines and long lists and big crowds and a thousand things to get done and credit card debt until Joy to the World holds no more meaning to our souls than Rudolph the Red-Nose Reindeer.

And our lives feel cluttered, but not full. And our souls feel thin and empty, like Bilbo Baggins says, like too little butter spread over too much toast. I feel that at times, and I bet some of you do too and what we desperately need is to slow down and reflect on the meaning of the Christmas story and what God has done for the world when He sent His Son to earth.

Matthew opens by bringing us into Joseph’s agony. He is betrothed to a young girl named Mary - kind of like a modern day engagement except that they were pretty much looked at as married and betrothal was a waiting period to test the couple’s purity and commitment. Before they are married Joseph finds out Mary is with child, and though the Bible doesn’t say it, you can bet his heart is broken. In his eyes there is no other explanation but that she has been unfaithful to him and immoral with another man and he knows the marriage plans have to come to a stop but Joseph is a righteous man and a kind man and he cannot bear the thought of exposing Mary to public ridicule and shame so he decides to divorce her privately.

Mary’s going through her own private agony too. She knows that she has been pure and that this child is from God, but she must bear the humiliation of the man she was to marry thinking she has been unfaithful and immoral and know that he is going to divorce her. She can only trust God with Joseph and there’s no guarantee that he will still marry her.

We don’t how long this went on for, but we know it went on long enough for Joseph to come to a decision about what he was going to do with Mary. And then one night an angel appears to Joseph and assures him that Mary has been pure and that this child is like no other child ever born. In fact this passage tells us two things about who Jesus is and why he came that are at the very heart of the meaning of Christmas.

I. Jesus is God with us

Hundreds of years before Jesus was born, a prophet named Isaiah predicted that a virgin would conceive and the child born would be “God with us”. This is why the shepherds and the magi came and worshipped the baby in the manger – for this child born in that stable was the God of the universe. He flung out the stars and lit our sun and measured out exactly where it needed to be. He created all that there is and here He is lying in a manger as a helpless babe. Jesus was not part man and part God but 100% man, 100% God.

God Himself, in the Person of Jesus, entered the human race to live among us and draw near to us. And here’s the amazing thing: Jesus was perfect. He was 100% holy and righteous and obedient to God His Father – sounds like the kind of sinful person no one would want to be around. If anyone had a right to be “holier than thou” it was Jesus, cause he really was holier than thou, holier than everyone!

But Jesus said he didn’t come to judge the world. He came because God loves this tired, sinful, fallen world – He loves the people of this world.

ILL: I was working in Wegman’s last week, and I looked up and saw this photograph probably from the 40’s or 50’s of people eating in a restaurant – I think it was a Wegmans. Some people are focused on their meals or each other. Some are looking at the cameraman (which made it seem as if they are looking at me).

Snapshot of the human race – people. Each with their own stories and lives and relationships and hurts and hopes. Most of them are probably dead now and their stories forgotten. But God knows each one – and He knows us too. God looks through history and He sees the human race and He loves each person – and on that holy morning so long ago He sent His Son, not to judge the world, but to save the world.

II. Jesus came to save his people from their sin

You shall call his name Jesus, for he will save His people from their sins. (vs. 21)

The name Jesus means, “the Lord saves”, but the angel is very specific about what Jesus came to do – not to save us from heartache or trials or disappointments or difficulties. A lot of times those are the things that we think we most need saving from. You want to help me? Help me get through this financial crunch. Help me get a job. Help save our marriage.

Jesus came to save us from our greatest calamity: sin. Sin is at the root of all our problems.

Bob Dylan wrote a song called Everything is Broken that says:

Bible would agree with Dylan, and identify what it is that breaks. Sin. Sin is destructive and it is deceptive – we often don’t know how destructive sin is until it’s too late.

ILL: Four weeks ago Tiger Woods was at the top of his game. Rich beyond belief, one of the most recognized faces in the world, a beautiful wife and two beautiful children. And the illusion of a squeaky clean reputation. Who could have imagined what crashing his SUV into a neighbor’s yard would lead to?

Now he has lost his reputation. Probably going to lose his family. And friends are concerned as he is staying in seclusion, reportedly watching cartoons and playing golf in the dark. We should pray for Tiger Woods and his family. These are dark days for them, but there is hope.

Everything is broken. But what I want to point out is that two months ago no one would have thought it possible, least of all Tiger himself. Sin breaks, but it also deceives. We can all relate to that. It has us do something we think is good, and then too late we regret it with all our hearts.

• We don’t know what those angry words will do until they are spoken. Then it’s too late.

• That adulterous flirtation seems harmless at first but in the end devastates everything we held dear.

• We don’t think our unloving, selfish lifestyle is a problem until we find ourselves alone in life and with a lifetime of regrets.

• We aren’t concerned at all about our spiritual apathy until years later when our children begin to follow us in it.

But the most tragic consequences of sin is that it has broken our relationship with our Creator. And a lot of people won’t even think that is any big deal until a few moments before their exit from this world. Then it will come crashing in on them with a force a thousand times worse than any fear they have experienced but it might be too late for them then.

As devastating as sin might be in our earthly lives, the real horror is the day we will stand before a holy God and give account. It is called judgment day and all those who die in their sins will be turned away from God forever – cast into eternal darkness, their relationship with God eternally broken. It is this brokenness that drives all the other brokenness.

That’s why Christmas is such, such good news. The message of Christmas isn’t a baby in a manger, it is a Savior born to a world in desperate need of saving. Jesus was born to die. It was on the cross that Jesus bore the punishment that we deserved for sin. On the cross, the God-man Jesus hung and absorbed the furious wrath that was mine and yours so that we would never need to.

So someone might wonder, he came to save his people. How do I become one of his people? The answer is very simple: believe in him. His arms are wide open and he promised that anyone who comes to him would never be cast away. Come to him and ask him to forgive you and save you from your sin. Jesus paid it all – you just need to trust him for that payment.

Not talking about the shallow, once a year at Christmas kind of belief that everyone has this time of year. Talking about believing in him with your life – surrendering your life to his Lordship and rule. Trusting his death entirely to pay for your sin and purchase eternal life with God as your Father and friend. No sinner is too far gone that Jesus’ blood isn’t powerful enough to save. And no one is good enough that they don’t need Jesus to save them. 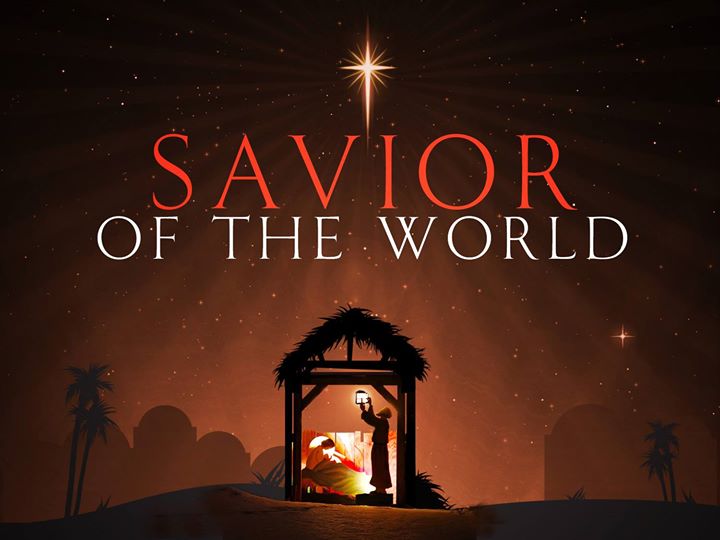 At the Corner of Wisdom and God

The Scandal of the Savior