Be Reconciled to God

Several years ago an advertising agency in Ft. Lauderdale, Florida came up with the idea of “billboards from God” – billboards that purported to speak for God and said things like “We need to talk” or “My way is the highway” or "Keep Using My Name in Vain And I'll Make Rush Hour Longer" and they’re all signed, “God”. I guess this advertising agency wanted people to feel like they were hearing a message from God as they were driving the freeway.

2 Corinthians 5:17-21 (in the NT just 8 books in. So if you go past the four gospels, you’ve got Acts, Romans, and then 1st and 2nd Corinthians. 2 Corinthians the fifth chapter).

Let’s pray and ask God to speak to us from this time in His word. Pray.

I. Our relationship with God has been broken

Notice that five times in three verses Paul uses the word reconciliation and he ends with the appeal, be reconciled to God. The word reconciliation means to take a relationship that was broken by enmity and alienation and restore it back into a friendship, so the first thing we see in this passage is that our relationship with God has been broken.

ILL: I was in an interesting conversation about the sun the other day. We started talking about how the sun keeps burning without running out of hydrogen or helium, but then the question was pitched, if the sun did burn out, how long would it take before we knew it? The heat from the sun travels at the same speed as the light from the sun, so it’s possible we’d have 8 minutes of warmth and light – and then utter cold and darkness beyond anything we could imagine.

We were created for relationship with God. The need for a loving relationship with our Creator is at the core of who we are as humans. The reason that our earthly relationships are so important to us is that God created us a relational creatures. That’s why very few people when they get older wish they had spent more time in the office – no, they wish they had spent more time with their family. That’s the reason why if your home is in flames, you would get your children out of the house before you would get the china out of the house. We don’t always live like this, but the most precious treasures we have are our relationships. But as precious and important as those relationships are in our lives, no person could ever take the place of God in our lives. We were created for relationship with God and no other relationship can fill that need in our hearts.

We’re living in the 8 minutes of warmth and light, but the source of that light and warmth has been cut off because of sin. Being alienated from God forever is the definition of hell – being separated from the source of all light and warmth – love, joy, justice, kindness – all good things come from God. If we don’t have God, we ultimately won’t have any other those other things either. The Bible tells us that our relationship with God has been broken and needed to be reconciled.

II. In Christ, God was reconciling the world to Himself

It’s important for us to know that we are the offenders and God is the offended. We sin against God and we are enemies of God. That’s strong, you might think, “hey, I’ve always loved God! I’m no enemy of God!” but the Bible says that we’re born haters of God. We might love religion, we might construct a god in our minds that we love – a god that thinks the way we do, feels the way we do, is at least ok with how we live our lives. In other words, we construct a god who looks and thinks a lot like us.

It’s like the religious leaders in Jesus’ day. They thought they really loved God - until God’s Son Jesus came along and started saying things that stepped on their toes. Started offending them. Started contradicting things they held tightly to. Suddenly it became clear they didn’t love God at all – they hated him. And they eventually crucified him.

We could never, and we would never, move toward God, but the Bible says that God, in His great love for us, moved towards us. In Christ, God was reconciling the world to Himself. The Offended God made the first move toward us – He gave His Son.

For our sake He made Him (God made Jesus) to be sin who knew no sin, so that in Him we might become the righteousness of God. (vs. 21)

ILL: I heard a story of a guy in college who was a strong Christian and had a squeaky clean reputation on campus. His roommate was pretty much Joe College and far from being a Christian and lived a pretty sinful lifestyle, but eventually through the witness of his Christian roommate, he also came to faith in Christ.

One night the Christians on campus were having what’s sometimes called an “Acts 19” bonfire – a night when they wanted to dedicate themselves to the Lord by throwing anything they owned that was offensive to God or hindering their walk with the Lord into the fire. So students were bringing CDs and movies and magazines and whatever they felt convicted about to throw into the fire as an expression of their dedication to the Lord. Well, the new Christian roommate couldn’t make it because he had to work, so he called Squeaky Clean Christian and told him there was a pile of magazines under his bed that needed to be thrown into the fire, would he do it for him?

So Squeaky Clean Christian had this armful of pornographic magazines that he was bringing to this bonfire. And as he threw a magazine into the fire, the Christians there burst into applause and cheering and he was mortified realizing that they thought it was all his. As he threw the next magazine in, the applause got louder. And even louder with the next. In shame and embarrassment he began to yell, “they aren’t mine! They aren’t mine!” as he threw each magazine in the fire. He felt the shame of his roommate’s sin and wanted to distance himself as far as he could from it.

Jesus was completely sinless, yet on the cross he took all our sin on his shoulders as if he committed them all, he felt the shame and humiliation of those sins. He felt His Father’s anger for those sins, and never once did he yell, “they aren’t mine! They aren’t mine!”

Jesus did all that to reconcile us back to God. Back to friendship with God. Here’s the wonderful thing: God didn’t send His Son to die just so that we could be forgiven and tolerated in His presence. God sent His Son to die so that the offense of our sins could be completely removed and we could be reconciled – restored to loving, intimate relationship with God. No barrier, no coldness, no distance. Friendship. Adopted as His children. Beloved by God.

Jesus didn’t come to give you religion, he came to restore you to relationship with God. And He did all the work. He paid the full price. So what is left for us to do?

III. God making His appeal through us…be reconciled to God!

God did all this for us through His Son. He has one message for us. If God did rent a billboard (and He won’t), here’s what it would say: 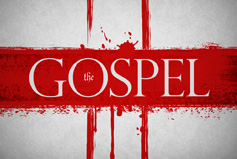 More in The Gospel

The Most Important Thing