We’re continuing our study of Galatians, so please turn with me to chapter 2.
On May 24, 1869, the explorer John Wesley Powell set out with nine volunteers to explore an unmapped and unexplored portion of the Grand Canyon using boats to navigate the rapids of the Colorado River. A month into the expedition one of the volunteers turned back, saying he’d had as much excitement as one man should have in a lifetime. The other nine continued on, facing new and increasingly dangerous rapids each day until finally, after 3 months, they came upon the worst rapids they had yet encountered and there was no way to walk around the rapids – they would have to ride them down river. Exhausted, discouraged, and fearing for their lives, three men in the party had had enough and decided to part ways.
The point that they hiked up and out of the canyon is now known as Separation Canyon – and it turned out that separation was a decision of life or death. Two days later the men who had stayed with Powell came to the mouth of the Virgin River and were met by settlers fishing on the river bank. The three men who deserted the expedition were never seen again.

Galatians records another kind of Separation Canyon. The Galatian churches were planted by Paul and had started out strong in the faith, but a group of false teachers called Judaizers had infiltrated their ranks and were teaching them that trusting in Jesus wasn’t enough to save them, they needed to obey the law and get circumcised if they were to be right with God. Their message was Jesus plus obedience to the law = salvation.
The letter of Galatians is Paul’s most urgent letter because what’s at stake is a matter of life or death. The Galatians are in danger of abandoning the true gospel for a false gospel that cannot save them. Paul writes in chapter one, verse 6:
I am astonished that you are so quickly deserting him who called you in the grace of Christ and are turning to a different gospel, not that there is another one…
So in chapter one Paul begins a defense of his apostleship (which the Judaizers have called into question) and a call back to the only gospel that can lead them to life; and in chapter 2 he continues that defense and urgent call back to the gospel of grace.
We are going to break this chapter up into three segments:

The Judaizers accused Paul of being an apostle wannabe – he wasn’t a real apostle, his message and authority were derived from the true apostles who lived far away in Jerusalem, and the problem is (they said), he got the message wrong. The Judaizers claimed that Paul, out of fear of being rejected by the Gentiles, preached faith in Christ only when he was with the Gentiles, but the message the Jerusalem apostles preached and endorsed was the Judaizer’s “Jesus plus law” message, not Paul’s gospel.
Paul defends his apostolic call against this charge by asserting that when he was converted he preached the gospel he received from God for three years before he ever went to Jerusalem, and when he did go, it was only for fifteen days and he only met with Peter and James. His apostolic call and gospel was given to him by God, not by the Jerusalem apostles. In chapter two he continues his story by telling them it was fourteen year more before he returned to Jerusalem, this time bringing Barnabas with him.
Why did Paul go up to Jerusalem this time? He tells us in verse 2: “I went up because of a revelation and set before them (although privately before those who seemed influential) the gospel that I proclaim among the Gentiles, in order to make sure I was not running or had not run in vain.”
This might sound like Paul is afraid after all these years that he is afraid that the gospel he preached wasn’t the real gospel and that his converts weren’t really saved, but that can’t be the case. Paul knew that he had received his gospel through revelation of Christ and he didn’t need men to authenticate it. What he was concerned about was whether the apostles would accept and acknowledge his ministry to the Gentiles and the churches he had planted as legitimate, or whether they would refuse to fellowship with them unless they embraced the law. He was afraid that there would be a deep division, a wall of separation between the Jewish church and the Gentile church, in effect creating two churches. That, Paul knew, would be a tragic blow to the unity of the church and the unity of the gospel.
And so to press on this issue, Paul brought a man namedTitus with him. Titus was exhibit A of Paul’s ministry: he was an uncircumcised Gentile who had come to faith through Paul’s ministry, and the question was: what would the apostles do with Titus? Would they insist he get circumcised? Would they refuse to accept him as a true brother in Christ? Or would they gladly accept the evidence of grace at work in Paul’s ministry and embrace Titus as a true brother in the Lord?
Paul was concerned, but he didn’t need to be. The apostles gladly confirmed God’s grace at work through Paul and didn’t try to add anything to his ministry or message. They accepted Titus as he was (which contradicted the Judaizer’s claim that the apostles preached that Gentiles needed to be circumcised) and they saw in Paul the same apostolic calling to the Gentiles that Peter had to the Jews. The unity of the gospel is confirmed by Paul’s visit to the apostles, but that unity would soon be challenged, and surprisingly it would be challenged by none other than the apostle Peter. Let’s read on.

At some point after Paul’s visit to Jerusalem, Peter makes the trek of about 300 miles north to Antioch of Syria to visit Paul. Antioch is the first place where Gentile churches were planted and it’s the launching point for all of Paul’s missionary journeys, so it’s a big deal that Peter comes to visit.
And at first things are going great – Peter’s having a great time and totally mixing it up with the Jewish and Gentile believers – they’re praying together, watching football together - rooting for the Broncos! - and eating at the same table together. No surprise there because Peter was the first apostle to get a revelation that God was breaking through the ethnic barriers and accepting Gentiles as clean in His sight simply through faith in Christ. You can read about that in Acts 10.
The problem comes in when certain men arrive in Antioch who were sent by James. These men represented the “circumcision party” – they believed Gentiles had to be circumcised to be accepted by God – and for whatever reason they came with the blessing of James.
And with these men comes a terrible virus called hypocrisy. First Peter catches it. Being afraid of risking their disapproval he stops eating with the Gentiles. Before they got there, he sat and laughed and fellowshipped with the Gentile believers as brothers in the Lord. Now he pulls away from them as if they weren’t good enough for him. As if being with them would make him unclean. As if they were second class Christians. And then the virus began to spread. All the other Jewish believers caught it and began to pull away too. Eventually even faithful Barnabas, who had been with Paul on his missionary journeys into Gentile lands, caught the virus and was “led astray by their hypocrisy.” (vs. 13)

Walking out of step with the gospel

The word hypocrite in antiquity comes from the idea of an actor, someone who would put on a mask and play a part in a performance. Over time the word came to mean the concealing of one’s true character, thoughts, or feelings, under a mask that looked like something different.
Hypocrisy in general is bad, but not all hypocrisy is equally bad. Sometimes hypocrisy can be fairly harmless, even humorous, like the time someone got up and toasted Prince Philip of Great Britain with two lines from the poet John Dryden:
A man so various that he seemed to be
Not one, but all mankind’s epitome

He seemed to be praising Prince Philip as a uniquely great man. Prince Philip was so flattered by the toast that he looked up the rest of the poem. Put back in context, it wasn’t quite as flattering:

A man so various that he seemed to be
Not one, but all mankind’s epitome
Stiff in opinions, always in the wrong;
Was everything by starts, and nothing long:
But in the course of one revolving moon,
Was chemist, fiddler, statesman, and buffoon.

All right, the guy was being a little hypocritical by only quoting the first two lines, but no real harm done. But Peter’s hypocrisy is a kind of virus that had the potential to do a lot of serious damage and here’s why: verse 14 says that they were not in step with the truth of the gospel. The mask Peter was putting on was distorting and misrepresenting the truth of the gospel. For a short time, Peter was leaving the straight path of the gospel – by his actions he was abandoning the grace of Christ and returning to a legalistic Christ plus the law gospel.

The damage of hypocrisy

The potential damage from this hypocrisy extended far beyond Peter and the Jews. It had the potential of doing serious damage to the Gentile believers who could see both sides of Peter’s hypocrisy. They knew how he acted before these men got there, and they watched him change out of fear of what the
Judaizers would think. This had terrible potential to undermine the work of the gospel in their lives.
If we are hypocrites, the people most harmed by it are the people who see both sides of our hypocrisy – those who see us when we take off the mask. Parents – if we’re one thing at church and another thing at home, our kids are watching, and few things will disillusion a child from following Jesus as much as a hypocritical parent. I’ve heard sad stories of men who serve as elders or leaders in a church but are abusive to their wives or children, or unfaithful to their spouses, and it is incredibly damaging and makes it so hard for those who see both sides of their hypocrisy to trust the church, other leaders, or even the Lord. Hypocrisy is very damaging at the workplace too: if your co-workers see two sides to you, the religious side, and the poor worker side, or the “make inappropriate comments or jokes” side, or the gossipy or mean-spirited side, it will do terrible damage to your witness. Few things damage our Christian witness and our Christian unity like hypocrisy because it declares loudly, “This isn’t real. This is play-acting”. Now the gospel is real, even if we are hypocritical, but if we’re the primary messengers of the gospel in someone’s life and what they hear/see from us is, it’s play-acting, then they will conclude that it’s all play-acting.
Paul saw the potential for great harm and publicly and fearlessly confronts Peter’s hypocrisy. He does it in front of the crowd so that all those infected by it – Jews and Gentiles – will get disinfected by the light of truth. Beginning in verse 14, Paul clearly lays out the gospel truth which binds us in gospel unity. 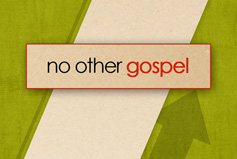 More in No Other Gospel

Boasting Only in the Cross (text)

The Principle of Sowing and Reaping

Characteristics of a Spirit Led Community