At the Corner of Failure and God Part Two

October 19, 2014 Speaker: Allen Snapp Series: At the Corner of Life and God

At the Corner of Failure and God Part Two

We are in a series called At the Corner of Life and God and we’re looking at how God wants to intersect with our lives in the everydayness of our lives. Last week we began to look at ways that God meets us in our failures and I want us to meet again at the corner of failure and God. Let me begin where I ended last week: God doesn’t want us to flounder in our failures. This isn’t about us setting up a permanent residence at the corner of failure, but we do need to visit it from time to time. There are lessons that God has for us, and work that God does in us in our failure.

There are many honest stories of failure in the Bible but we are learning from Peter’s failure when he denied Jesus three times. Let me recap briefly from last week.

Peter is the most prominent of the twelve disciples and his failure is also by far the most visible and public failure to the point that it eclipses the failure of the other ten disciples during those dark hours when Jesus was arrested. To add to the prominence of Peter’s failure it is recorded in all four gospels and we asked why. What are we to learn from God highlighting the most prominent apostle’s failure? Is it a warning, don’t let this happen to you? Or is it to make us think, “man, I’m glad that wasn’t me”?  Actually when Jesus said that Satan demanded to sift “you”, he used the plural, meaning Satan demanded the opportunity to sift all the disciples. Peter is just the most visible victim of that sifting. Peter’s failure was representative of all the disciple’s failure, and of our failure as well.

Peter’s failure didn’t disqualify him as a follower of Jesus, it was what qualified him to be a follower of Jesus. And it is what qualifies us to be followers of Jesus as well. One of the Greek words for sin is the word hamartia and it means to have a fatal flaw that is serious enough to bring a person’s life down in flames. That’s what sin is in us: a fatal flaw, a terminal failure that causes us to fall far short of God’s holy standard. On the cross, when Jesus said, “it is finished” it meant that he perfectly succeeded where we failed. Jesus paid for the shame and failure of our sin, freeing us from the guilt and punishment that was due us. When we put our faith in Jesus we are completely forgiven for our spiritual failure and share in Christ’s beautiful holiness and perfect success. In the gospel God meets us at our failure with Jesus’ perfect success!

Jesus told Peter that after he had turned again, to strengthen his brothers. In other words, take the painful lesson you’re going to learn Peter, and use it to encourage and strengthen your brothers.

We don’t want to miss the emotional tension in this scene. This is the first time that Peter and Jesus have a one on one since Peter denied knowing the Lord. Jesus is going to confront Peter’s failure and bring resolution to the elephant in the room, but look at how he does it.  He doesn’t reproach Peter; he doesn’t even bring up Peter’s failure. He reverses Peter’s three denials with three confessions of love. Yes, in the Greek language we can see that Jesus is probing Peter’s depth of love, but the bottom line is Jesus draws three confessions of love out of Peter and repeats three times his commission to Peter to feed and tend the Lord’s sheep.

On January 1, 1929, the University of California football team faced Georgia Tech in the Rosebowl. Halfway through the second quarter, Georgia Tech fumbled the ball and the University of California center, Roy Reigels picked the ball up and, after getting hit by a couple guys broke free and ran 65 yards –in the wrong direction! His own quarterback ran after him shouting all the way to stop, finally catching up to him on their own 3 yard line, but by then Georgia Tech caught up to him and tackled him on the 1 yard line. The ball still belonged to U of Cal but they were so close to their own end zone that they decided to punt. Unfortunately the ball was blocked for a safety which meant that Georgia Tech got 2 points out of Reigels mistake giving them a 2-0 lead. Georgia Tech went on to win the game 8-7 – it was the 2 points Georgia Tech scored off of Riegel’s mistake that would result in U of Cal losing the national championship.

Riegels wrong-way run is cited as the worst blunder in the history of college football and if you google his name you’ll find him listed as Roy “Wrong Way” Riegels– his failure has been woven into his identity. Failure can often be attached to us as a label, either by others or by ourselves. It could be a parent who tells us we’ll never amount to anything, or peers who find our weakest point and manufacture a label to advertise that weakness. Or it could be a moral or ethical failure that caused great hurt and remorse and regret to ourselves and to others.

When failure becomes a label it can become a deep part of a person’s identity and a driving force in their lives. Sometimes it drives a person to a…

I spent some time last week on the point that Jesus didn’t come to seek and save successes, he came to seek and save failures – all those who confess that we have hamartia (a fatal flaw) and receive his forgiveness. So in a very real sense we are abject failures saved only by grace and mercy. But the NT doesn’t label us as failures. God doesn’t paste the label “sinner” or “lost” or “failure” on us. When we come to Christ in faith, God gives us new labels: we are called “saints”, “beloved children”, “chosen of God”, “God’s own possession”.

God wants to meet you in your failure to refine you, not to define you. Lose the label – God has renamed you. Like Peter He confronts your failure with love and recommissioning, not condemnation. Jesus helped Peter to see that his failure wasn’t fatal. Jesus didn’t say to Peter, “hey, I still love you. Let’s forget about it and move on.” No, Jesus knew that the problem wasn’t that Peter didn’t think Jesus loved him. The problem was that Peter knew his own love for Jesus failed big time. But he still loved Jesus – more than he loved anyone! So Jesus drew that out of Peter until finally (a little frustrated) Peter says, “Lord, you know everything, you know that I love you” and after each profession of love, Jesus reminded Peter he still had a job for him to do, the failure refined him but didn’t sideline him.

Roy Riegels went to the locker room at halftime and sobbed. He didn’t want to play the second half even when the coach told him he needed to. “Coach, I can’t do it,” he said.  “I’ve ruined you, I’ve ruined myself, I’ve ruined the University of California. I couldn’t face that crowd to save my life.” Coach Price responded, “Roy, get up and go back out there – the game is only half over.” Riegels did play and turned in a stellar second half performance.  He went on to become the team captain in his senior year. Failure made him stronger as a leader because he didn’t give up.

Michael Jordan did a commercial where he says, “I’ve missed 9,000 shots in my career. I’ve lost almost 300 games. Twenty-six times I’ve been trusted to take the game-winning shot and I have missed. I’ve failed over and over and over again in my life.” Then he says, “And that’s why I succeed.” Failure has a powerful refining effect in our lives when we pick up and try again and God uses failure to refine us into men and women who pick up and try again. And again. And again. Jesus tells Peter that the day will come when Peter will die for Jesus. The writer of the gospel John inserts this commentary into the scene: This he said to show by what kind of death he (Peter) was to glorify God. If Peter had stood for Jesus in the courtyard and had been killed for his testimony, Peter would have been the one who got the glory. What a guy. What a faithful disciple. When all else fled, Peter stood strong. That’s what Peter wanted, but he failed. But Jesus was going to refine him so that it was the power of the Spirit that would enable him to stand for Jesus and die for Jesus and God would get the glory – which is far better.

Lose the label, don’t let others pin it on your heart or mind (you can’t do much about people saying it). Embrace failure and allow God to refine you through it, but know that God doesn’t define you by it and you shouldn’t either.

This point is closely related to the previous one – when we fail, especially if we have somehow had the label “failure” attached to us – we can be tempted to compare ourselves to others who, in our eyes, seem so successful. Let’s read vv. 20-23.

After talking to Jesus, Peter turns and sees the Apostle John following behind them. And there is this odd exchange, “Lord, what about this man?” In other words, is his life going to go in the same direction? I think there is some underlying tension in this scene as well. Remember, Peter is still raw over how he failed Jesus and wound is aggravated by seeing John following them. John was the disciple that Jesus loved – there was a special closeness to John and Jesus’ relationship. John was the disciple who reclined with his head near Jesus’ chest. He was the one close enough for Peter to ask him to find out who would betray Jesus. John was the one who, at the cross, Jesus turned to and gave the charge over his mother to. John didn’t have this emotional baggage that Peter had. And so Peter is concerned about whether John would have the same path that Peter had, or would he get special “non-failure” treatment?

Jesus mildly rebukes him, essentially saying, what does it matter to you what plans I have for him? You follow me in the plans I have for you! Following Jesus doesn’t look the same for any of us. The Lord has a path and a plan for each of us to glorify him by and we shouldn’t look at someone else and envy how following Jesus looks different for them. When I taught on success and God I said that success as defined by God is doing what God has called us to do and going where God has called us to go.

(Call band up) As we close, I believe the Lord Jesus wants to have a one on one with some here. You feel like you’re a failure – you wear the label. Jesus wants to walk the beach with you and remind you that he died to rename you. Saint. Beloved. Son/daughter. Chosen. His treasured possession. I believe he wants you to hear his voice in your heart right now, and he’s not saying “failure”. He’s saying “follow me”. Let’s pray.

From the Inside Out 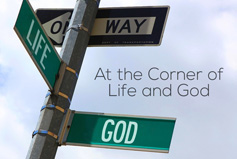 More in At the Corner of Life and God

At the Corner of Promise and God Part Two

At the Corner of Promise and God Part One

At the Corner of Man and God Part 2