December 23, 2018 Speaker: Allen Snapp Series: Jesus Was Rejected That We Might Be Accepted

What comes to mind when you think of Christmas? No other time of the year has as many season-specific traditions as Christmas does. There are Christmas trees, Christmas lights, and Christmas decorations, we sing Christmas carols and watch Christmas movies like It’s a Wonderful Life and Miracle on 34th Street. And we drink egg nog. Ever notice that egg nog only comes out at Christmas? Try finding egg nog in July. Why is that?

But there is another word – a surprising word- that is deeply woven into the birth, life and death of Jesus. A word that is shockingly etched into Jesus’ identity. That word is…rejection! Listen first to Isaiah, and then to the Apostle John:

Who has believed what he has heard from us?
And to whom has the arm of the Lord been revealed?
2 For he grew up before him like a young plant,
and like a root out of dry ground;
he had no form or majesty that we should look at him,
and no beauty that we should desire him.
3 He was despised and rejected by men,
a man of sorrows and acquainted with] grief;
and as one from whom men hide their faces
he was despised, and we esteemed him not. Isa. 53:1-3

9 The true light, which gives light to everyone, was coming into the world. 10 He was in the world, and the world was made through him, yet the world did not know him. 11 He came to his own, and his own people did not receive him. 12 But to all who did receive him, who believed in his name, he gave the right to become children of God,13 who were born, not of blood nor of the will of the flesh nor of the will of man, but of God. John 1:9-13

Jesus’ life was characterized at every point by rejection.

putting her away, gently but decidedly rejecting Mary and the unborn Jesus. Only the word of an angel convinced him to remain betrothed to Mary.

From his birth to his death, rejection was a significant theme running through Jesus’ life. He came to his own but his own received him not…he was despised and rejected by men.

The question is, why? Why was Jesus’ life so characterized by rejection? Why would he leave his throne in heaven where he was loved and worshipped and obeyed unquestioningly and come to earth, where for the most part he wouldn’t be loved and worshipped, he would be hated, mocked, despised and rejected?

It is for this one simple, glorious reason: Jesus was temporarily rejected so that we might be eternally accepted. Jesus was rejected by man and even for a brief time by God so that we might be accepted by God as dearly loved sons and daughters. God the Son entered the human race as a man in order to identify with us and save us from our wretched condition and rejection is at the core of the human condition. We have rejected God. When sin entered the human race, it caused our hearts to go rogue, rejecting the God who created us, rejecting God’s rule over us, setting ourselves up as our own gods,

ruling our own lives. We are born with a sin nature that rejects God and turns from His ways.

But that rejection is a two way street. Because of our sin, God must reject us. God is perfectly righteous and just and He hates sin with a ferocity we can’t even begin to imagine. When people think that they’re ok with God because they’ve never done anything all that bad, they have no idea how repulsive and serious their sin is to God. Hell is God casting us away from His presence – rejecting us from His presence - forever. It is the most horrifying and terrifying rejection imaginable.

Rejection is at the center of mankind’s problem: we reject God and God rejects us. At Christmastime when we come to the stable and look into the manger and see Jesus lying there, we are seeing God’s Master Plan for turning rejection into acceptance. Jesus the Son of God became a man so that he could represent God to man and man to God and that includes the rejection on both sides. When men rejected Jesus it was simply an expression of their rejection of God. John writes: And this is the judgment: the light has come into the world, and people loved the darkness rather than the light because their works were evil. 20 For everyone who does wicked things hates the light and does not come to the light, lest his works should be exposed. John 3:19-20 It’s scary that the religious leaders led the way in rejecting Jesus. This shows us it’s possible to love religion and hate God.

As Jesus hung on the cross, God would reject him because he represented mankind and all its sin. We esteemed him stricken, smitten by God, and afflicted…and the Lord has laid on him the iniquity of us all. Isaiah 53:4,6 Jesus took the punishment and the fury our sins deserved.

Jesus would absorb all this rejection and transform it into acceptance. At Christmastime when we come to the stable and look into the manger and see Jesus lying there, we are seeing God’s Master Plan for turning rejection into acceptance so that to as many as received him, he gave the power (authority) to become children of God. You don’t get more accepted than being adopted into the family as a child. When we accept Jesus by faith as our Lord and Savior, God forgives us our sin and adopts us as His own beloved children. We are born again into the family of God, deeply and forever accepted by God, never to be rejected by God. This is the good news of great joy the angels spoke about. It’s the greatest gift we could ever be given.

If you have never done so before, will you accept Jesus as your Savior? This is the most important decision you will ever make in your entire life. God gave us His Son Jesus knowing that most would reject him, but to all – all – who accepts him, he gives the power to become sons and daughters of God. In God’s eyes, all of mankind is divided by this line: those who reject Jesus and those who accept Jesus. Rejecting Jesus is a broad category. You can reject him by hating him, and you can reject Jesus by ignoring him. And everything in between. To accept Jesus means coming to him with humility, honestly confessing and turning away from your sin, and asking him to come into your life, forgive you of your sin, and make you a son or daughter of God.

Jesus made a way for you to be accepted wholeheartedly by God. When Christ is your Savior, nothing you’ve done can turn God’s heart against you, no failing or flaw of yours can make God reject you. It’s not something you need to earn, or work for. Like all gifts, it’s something that must be received. To as many as received him, he gave the power (authority) to become children of God. We receive it by faith, by believing in Jesus. Won’t you consider his claims this morning and believe in he who died for you?

If you are a Christian, I believe God wants you to do this: know that God accepts you as you are and will never reject you. What freedom that brings our hearts! Freedom from fear of rejection. Freedom from the hamster wheel of legalism where we’re always running to earn God’s acceptance but never getting anywhere. Freedom from endlessly trying to prove something. Freedom to run to God for what we need.

Also freedom from living for people’s acceptance and in fear of people’s rejection. As we come to the stable, see the baby in the manger, we’re seeing a Savior who entered the human race and the human condition in order to rescue us. Rejection is a big part of the human condition because fear of rejection is a deep current in the human heart. We don’t want to be rejected by others but many of us live with a deep fear that we will be rejected. When people find out who I really am, they may reject me. And we feel their rejection will define and destroy our identity. We work so hard to fit in. To not stand out. Or at least to stand out in a way that makes us fit in.

I think a lot of free-floating anxiety comes from a dread of rejection and deep desire to be accepted. And while we may not know it, that deep dread is anchored in an unconscious fear of being rejected by God on Judgment Day. Even those who say they don’t believe in God know deep inside that one day they will face their Creator. God has hard-wired that inside of us. We may deny it, but it comes out in a vague, free-floating anxiety. Jesus frees us from that. Jesus’ identity wasn’t built on whether people accepted or rejected him. He was rejected and despised by men, but because he was loved by God, all the rejection bounced off his identity and didn’t affect it at all. Jesus said, “I am” meaning his identity is eternal and unchanging and can’t be changed or affected by human rejection or acceptance. When our identity is found in Christ we don’t have to live fearing people’s rejection or craving their acceptance. Our identity isn’t built on their rejection or acceptance. It’s built on something far stronger and more solid: Christ’s acceptance. If God is for me, who can be against me? Oh to breath the clean air of God’s acceptance and be freed from the fear of being rejected. What am I going to do with this gift? Enjoy it. Live in it.

And there’s one more thing God asks us to do with this gift. Share it with others. Jesus was born to be the Savior of the world, and he calls his followers to share the good news with the people in our lives.  People are longing for God’s love and acceptance, tell them about Jesus. “But they might reject me if I tell them I’m a Christian and share the gospel with them”. Yeah, they might. But you’re so accepted by God you can risk that. If someone rejects you it won’t define you or destroy you. And they might accept Christ. How will they hear and have faith unless someone tells them? Invite them into your life – to your home for coffee, to your CG, to church, to a football game. Jesus endured rejection all his life so that we might enjoy God’s acceptance, let’s do the same: risk people’s rejection in order to tell them about the good news of God’s salvation in Jesus. 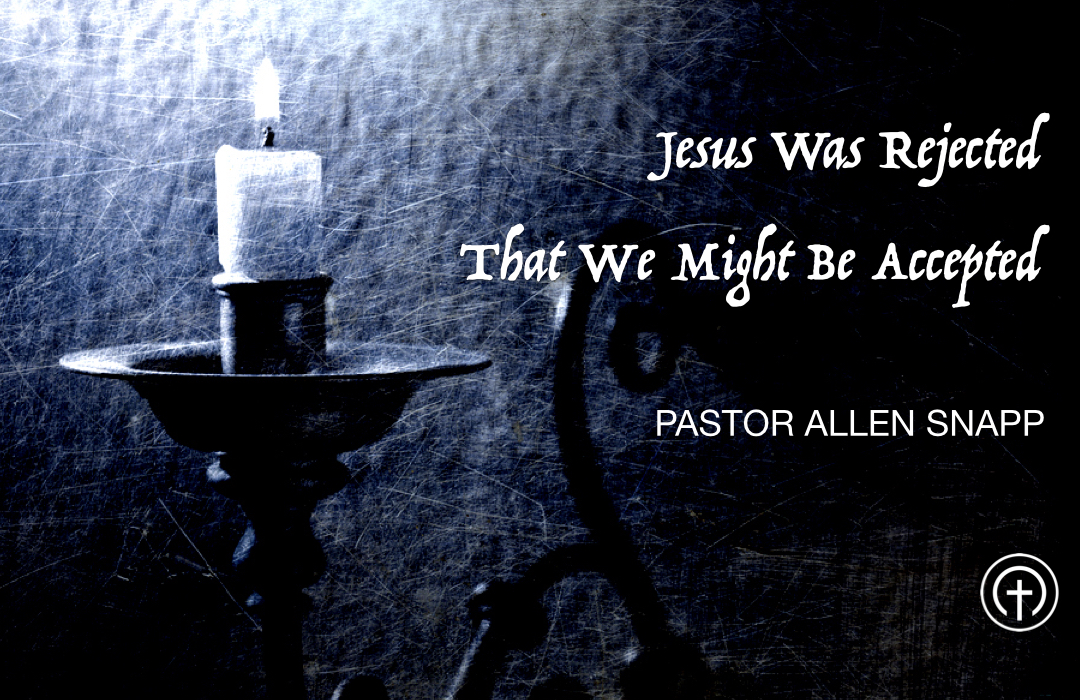