In verses 1-6 James talks to non-Christian wealthy land owners who are defrauding and cheating their workers and advises them to weep and wail because of the terror that is coming their way on the Day of Judgment. We spent the past two weeks looking at the Day of Judgment when God settles all accounts with man. We know James is talking to unbelievers because he offers no counsel or hope or exhortation, just the advice to weep and howl for what’s coming. For the unbeliever the Day of Judgment is a day of terror and woe.

But for the believer the Day of Judgment is a day of hope and joy. Starting in verse 7  James is talking about the same day – as we see in verse 9 when he says behold the Judge is standing at the door – but from the perspective of the believer, and it’s not a day of terror and woe, it’s a day of hope and joy. Twice he calls it the “coming of the Lord” (vv. 7 and 8) emphasizing the glorious return of our Lord Jesus Christ which is a joyous event for the believer. And where James’s advice to unbelieving defrauders is to weep and howl, his advice to Christians is to “be patient”. That day is coming…so be patient!

When James refers to the coming of the Lord (vv. 7 and 8) and the last days (vs. 3) he is talking about the time when Jesus will physically and visibly return to the earth and history as we know it will end. And throughout the centuries believers have wondered, will Jesus return in my lifetime? Are we living in the last days? It raises fascinating questions about the rapture and the antichrist and the tribulation and I thought about doing a brief detour and looking at what the Bible says about the last days, but if we do that we run the risk of losing the flow of James’ thought here so instead let’s finish out the book of James and then come back to these questions in a short series I’ve titled Are We Living in the Last Days? It should be an interesting study.

The first thing James says when he turns his attention back to believers in verse 7 is, be patient. In fact, six times he talks about patience under pressure, using two different Greek words that essentially mean the same thing: the ability to endure, to persevere, to keep going, under the weight of trials. In the opening verses of this letter James exhorted them to count it all joy when they encountered various trials. Now he’s encouraging them to be patient. The coming of the Lord is at hand so be patient.

First, it is the intersecting of human perspective and God’s perspective. For us “soon” is seen in the time frame of our earthly lives. To us if something is “at hand” it’s a day, a week, maybe a month away. Maybe a year. But “at hand” means really, really soon. For us 2000 years doesn’t qualify as “at hand”. It reminds me of the preacher who would come to the point in his message where he’d say, “in conclusion…” and go on for another ten minutes and then say, “and in conclusion…” and then go on for another ten minutes before saying, “and in conclusion…”. Finally a little boy looked up to his dad and asked, “dad, what does ‘in conclusion’ mean?” and his dad replied, ‘absolutely nothing, son, absolutely nothing.’ I don’t think in conclusion means what that preacher thought it means. We’ve been waiting for the conclusion of history for one century, two centuries, ten centuries, twenty centuries and it’s gotten to the point that we’re not sure “at hand” means what the early Christians thought it meant. But that’s “at hand” from a human perspective.

The second reason is that the Holy Spirit wants every generation of Christians to believe Jesus could return in their lifetime. He wants us looking at the sky and saying, “maybe today”. There is something hopeful and cleansing in that for us. And as we’ll see it fosters a patience in us that enables us to bear the weight of trials without losing hope or giving up. As you look for the coming of the Lord be patient.

1. Be patient and trust God with what you can’t control

James says “have the patience of the farmer”:

The farmer does what he can do, preparing the ground and planting the seeds, but then he needs to wait. In Israel the early rains came in Autumn and the late rains came in early spring. The farmer needed both rains, so he needed to give the crops time (patience), and he couldn’t control the rains, so he had to trust God with what he couldn’t control. The farmer needs certain things to happen and he needs a certain amount of time to pass. He can’t hurry the process or he will destroy the very crop he hopes to grow.

There are things that happen in our lives that are outside of our control. Trials that enter our lives that we really can’t do much about. And the timing of when those trials come and when they leave is often beyond our control too. As a trial lasts for months, years, even decades impatience can rise up and cause us to try and take things into our own hands. If it’s bad enough, we might be tempted to say, “I’m done obeying God, I’m done waiting for God, I’m going to do whatever I need to do to get immediate relief.”

James says “be patient.” Take a deep breath, let the weight of the trial press down on you and trust God for today’s strength to bear it, looking forward to the coming day when Jesus returns and rights every wrong, wipes away every tear, and lifts every trial. 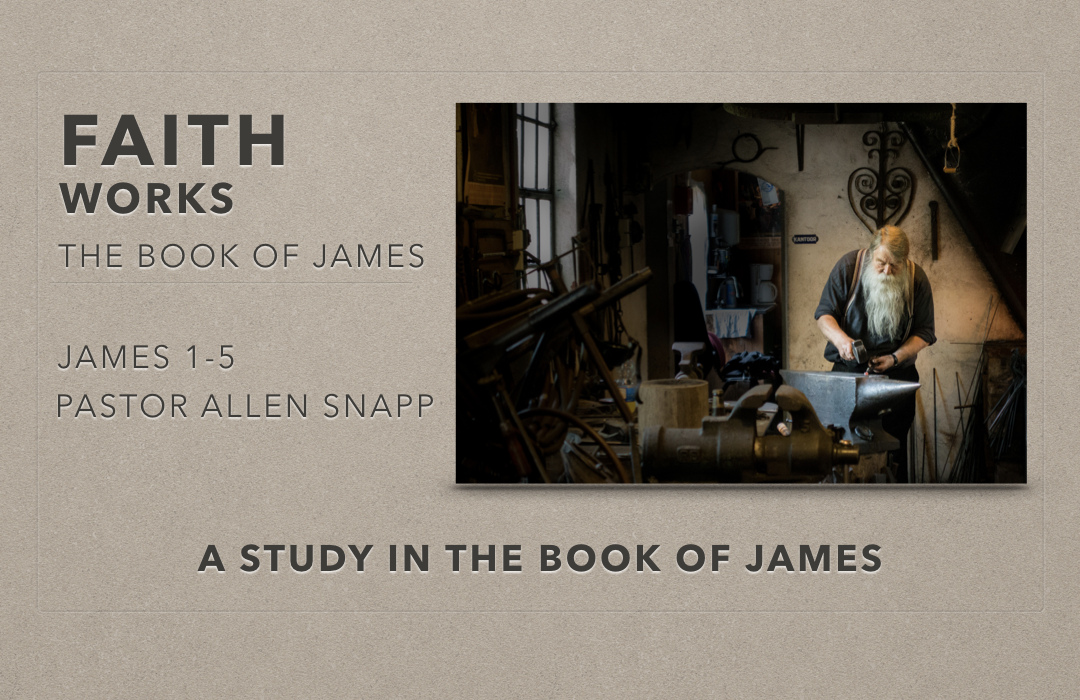