The Coming of the King

April 14, 2019 Speaker: Allen Snapp Series: The Road to the Ressurection

The Road to the Resurrection

The Road to the Resurrection: The Coming of the King

Starting last week and heading into Easter we are in a series called the Road to the Resurrection and this Palm Sunday that road takes Jesus into the city of Jerusalem and into the final week leading up to the crucifixion. Let’s read Luke’s account of that Palm Sunday.

One day I was flipping through a book about English monarchs and looking at the portraits of some of them and trying to imagine, “would I want this guy to be my king?” And for most of them I was thinking, I wouldn’t trust this guy to sell me a used car, much less have absolute say over my life and whether I live or die. They say a picture is worth a thousand words, so let me show you just a few of the portraits I’m talking about and just imagine that you are standing before these men as they sit on their throne and on a whim they could end your life with a word.

I get the feeling that if you take away the trappings of majesty – the throne and crown and robe and scepter – the best of these guys were ordinary men, and the worst of them were terrible men. What they wore was greater than who they were.

Jesus was just the opposite! Who he was was far greater than the trappings he wrapped himself with. Jesus concealed so much of his majesty with the robes of humility.Born into a poor family, raised as a humble carpenter, he was cut from humble cloth. Even after he began his public ministry he often seemed more interested in putting a lid on his fame than promoting it.

But every once in a while Jesus would pull back the robe of humility and unveil just a glimpse of his majesty and this moment as he rides into Jerusalem is one of those times. For us the idea of a guy riding into town on a donkey may not seem very impressive, but to the crowds waiting to welcome him it was a really big deal as they remembered the words of the prophet Zechariah:

king is coming to you; righteous and having salvation is he, humble and mounted on a donkey, on a colt, the foal of a donkey. Zech. 9:9

Even this passage emphasizes the humility of the coming king. Rejoice and shout for joy for your king is coming – but he will be humble and mounted on a donkey. For a king who wanted to make an entrance, they would usually ride a warhorse. Made a bigger statement. Kings rode donkey’s when they wanted to emphasize they were on a mission of peace. Zechariah is predicting that the king they were waiting for

would come on a mission of peace bringing salvation.

So Jesus knew as he rode that donkey into Jerusalem that he was declaring that he was that king. The king they had been waiting for. The king the prophets had predicted. So it’s no surprise that the crowds went wild when they saw him coming. This is the king Zechariah prophesied would come! This is the king we’ve waited for for thousands of years! This is the king who will establish his throne and free our nation from oppression! This is the king who brings salvation! That’s why they cried out “Hosanna” as he rode by - it means “save!”, and they laid palm branches and coats on the road in front of him as he made his royal entrance into the city of David. This is one of the very few moments where Jesus pulls back the robes of humility and reveals the robes of majesty.

And that doesn’t make the Pharisees happy. They know the passage in Zechariah, they know the statement that Jesus is making, but they don’t want Jesus to be their king. They have rejected Jesus as king and they are jealous of his popularity and offended that crowds are making him out to be a king. So they tell Jesus, rebuke your disciples. Tell them they’ve got it wrong, that you aren’t a king. Set the record straight, tell them you are far less than they think you are.

Don’t miss the power of Jesus’ answer. He pulls back the robes of humility even more and reveals just a glimpse of his glory. The truth is, Jesus is far more than who they think he is.

I tell you, if these were silent, the very stones would cry out. Vs 40

If these crowds don’t honor me as King, creation will. Jesus hid his glory so that men couldn’t see who he really was, but creation knew. The stones under his feet were saying, “do you know who’s walking on us right now?” Demons knew – “we know you are the Son of the Most High, don’t send us to hell!” But men could miss it, and this is one of those moments when Jesus pulled back the humility robe just a little and the brilliance of his glory shone through.

Another moment is on the mount of transfiguration – Peter, James and John saw his glory – face shone like the sun, and his clothes became as white as light. Then there were the times when he commanded the winds and the waves to obey him and they immediately obeyed him.

The disciples were afraid and wondered, “who is this, that even the winds and waves obey him?”

One more majestic moment in Jesus’ life that has long fascinated me is found in John 19.

5 When Jesus came out wearing the crown of thorns and the purple robe, Pilate said to them, “Here is the man!” 6 As soon as the chief priests and their officials saw him, they shouted, “Crucify! Crucify!” But Pilate answered, “You take him and crucify him. As for me, I find no basis for a charge against him.” 7 The Jewish leaders insisted, “We have a law, and according to that law he must die, because he claimed to be the Son of God.” 8 When Pilate heard this, he was even more afraid, 9 and he went back inside the palace. “Where do you come from?” he asked Jesus, but Jesus gave him no answer. John 19:5-9

Verse 8 in particular intrigues me: when Pilate heard this he was even more afraid…Jesus could not have looked less royal than he did at that moment. He could not have looked less impressive or like the Son of God. He was beaten, bloody, weak, and half naked as he stood in front of Pilate. Delivered to Pilate by Jesus’ enemies, he was dressed in a purple robe and wore a crown of thorns to mock his claim of being a king. When the crowds said that Jesus claimed to be the Son of God, Pilate should have laughed. This man, a king? Ridiculous. But Pilate doesn’t laugh, he’s afraid. Something about this man and his poise and lack of fear and silence says that he is more than he appears. So Pilate goes back to Jesus and asks, almost desperately, where do you come from? Who are you?

History is full of small men who declare themselves king and wrap themselves with the robes of power and royalty to make themselves look great. Jesus is different. He is a great king who wrapped himself with the robes of humility to keep people from seeing how great he is. The question is, why? Why did Jesus do it that way? To answer that, we need to understand why Jesus came and what he came to do. Jesus came to triumph over his enemies, but it was a different kind of war and a different kind of triumph.

If you look at your Bible, it probably contains the heading, The Triumphal Entry. Mine does. And it was a triumphal entry. People are screaming, “be our king! Take your throne! Rule over Israel! Conquer our oppressors! Save us! Yay King Jesus!!” His majesty is so glorious that if the crowd went silent, the stones, rocks, and boulders around him would take up the cry: “Yay King Jesus! You’re here! Take up your rightful throne and rule over this sin-weary, broken world!”

But less than a week later these same crowds would be crying out “We have no king but Caesar – crucify him!” Jesus turned out to not be the king they wanted. They wanted him to lead them to victory against Rome and establish his throne in Jerusalem and bring them the prosperity and golden years that Israel longed for.

The road to the resurrection didn’t end with Jesus’ triumphal procession on the road to Jerusalem. Just a few days later Jesus would lead a very different kind of procession out of Jerusalem on the way to the cross. He would be bloody and beaten with a crown of thorns on his head and a heavy cross on his shoulders. As he stumbled down the road on the way to Golgotha where he would be crucified the crowd followed him. Some wept out of pity for him, but others mocked and laughed at him. This was entertainment for them – they were enjoying the spectacle of this man who claimed to be king being humiliated and shamed and executed.

Jesus would be nailed to a cross and would be lifted up on a hill called Calvary. A sign written in several languages would be nailed above his head, “This Is the King of The Jews” to make a mockery of such a claim. The road that just a week ago saw him entering Jerusalem triumphant has led him to defeat and death. Triumph has been turned to failure. Or has it?

He forgave us all our sins, having cancelled the written code, with its regulations, that was against us and that stood opposed to us; He took it away, nailing it to the cross. And having disarmed the powers and

authorities, He made a public spectacle of them, triumphing over them by the cross. Col. 2:13-15 (NIV)

Satan’s plan was to bar us from the kingdom of Christ forever. King Jesus went to war against the devil and he blew Satan’s plan to smithereens on the cross. He not only triumphed over the devil on the cross, he made a public spectacle of him!Angels and redeemed people and God the Father looked down on the cross and saw Jesus destroy sin and death and Satan look like the weak, cowardly, jerk that he is. Jesus made a spectacle of him and all his minions on the cross. Best of all -the gates of God’s eternal kingdom were opened wide to any and all who believe in Jesus Christ. The victory Jesus won on the cross was our victory. His kingdom and authority were never in jeopardy. He nailed the written code that was against us to the cross and triumphed over the powers and demonic authorities by the cross.

If Jesus is that good a king, if he loves you and loves me that much, why wouldn’t we bow our knees and yield our lives to his Lordship? How could we not take ourselves off the throne of our lives and place him on the throne, giving Jesus full control?

Is there some part of your life that you’re holding back from Jesus? Something that you are gripping so tightly and won’t submit it to him for fear of what he’d call you to do?

All Hail the Power of Jesus’ Name 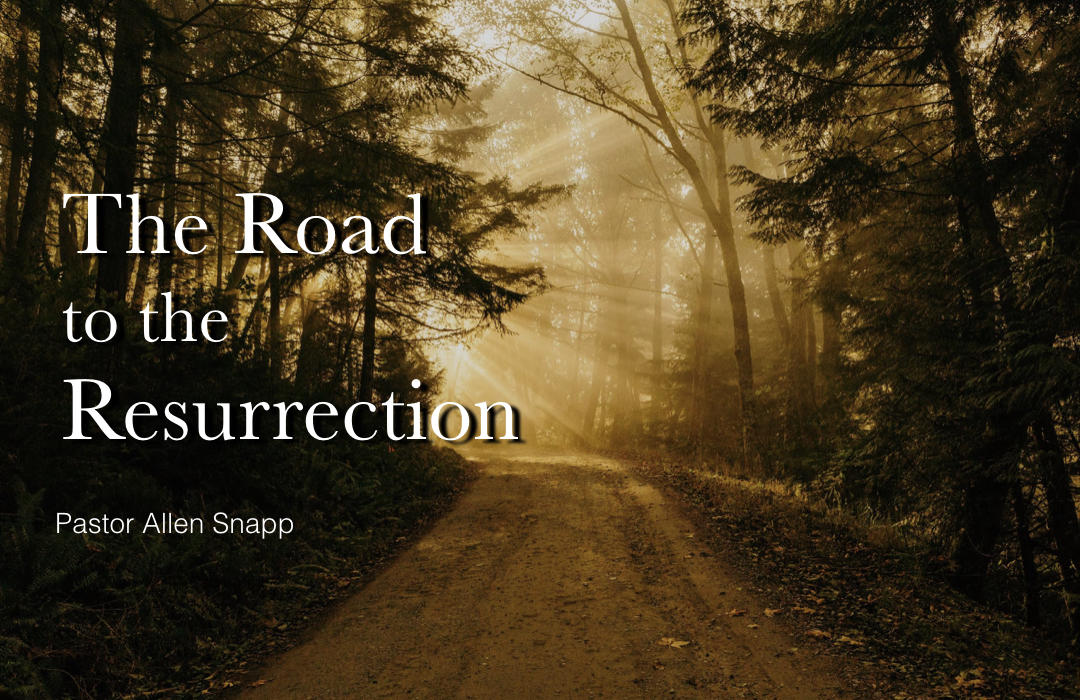 More in The Road to the Ressurection

The Road to the Resurrection: Jesus’ Life and Ministry