The Quest for Character

When I was nine years old I was left alone to cook my own dinner for the first time. My mom and dad had divorced a few years previously and I lived with my dad and he wasn’t going to be home for dinner. But he set me up with a turkey tv dinner. Remember TV dinners? A silver tray of compartmentalized deliciousness that included meat, a carb, a vegetable, and best of all, dessert. Do they still even make them? Anyway, I was pretty excited so when the time came I got the tv dinner out of the freezer, went to the oven, set the temp for 375 degrees, put the frozen dinner in the oven, turned on the tv… and waited. In case you’re wondering, this was LONG before the days of microwaves. The problem was, the oven wasn’t heating up. I’d never used the oven before so I thought maybe it takes a long time, but ten minutes later, still nothing. I checked the temperature – definitely set to 375. But nothing was happening. The oven wasn’t heating up. I figured it must be broken.

Finally I couldn’t wait any longer so I began to eat the frozen TV dinner. I had to chisel every bite off, but I figured once that frozen turkey thawed in my mouth it would taste like turkey. Turns out it didn’t.

When my dad came home, and I told him the problem I had, he asked me if I had turned the oven on. Yes, I’d turned the temp setting up to 375. That’s the night I learned there was another dial that had to be set to “bake”.

As we continue our quest for character, this morning we’re going to consider a character quality known as compassion. Compassion is a function of love, but it’s a particular expression of love: it’s being moved by someone’s else’s plight. The Latin word compati means to suffer with. The Greek word splangchnizomai (splankh-ne-zo-mi) means to have our organs move within us. Compassion is seeing someone in need and being moved by their need, by their pain, by their plight.

Compassion goes to the heart of who God is. Psalm 145 declares: The Lord is gracious and compassionate, slow to anger and rich in love. The Lord is good to all; he has compassion on all he has made. Psalm 145:8-9. 2 Cor. 1:3 says God is the “Father of compassion”.

Over and over again in the gospels Jesus is moved with compassion, such as recorded in Matt. 9:39. When he saw the crowds, he had compassion for them, because they were harassed and helpless, like sheep without a shepherd. Matt. 9:39

Without compassion, the church is a lot like that frozen tv dinner – we might talk about Jesus, but we aren’t going to taste like Jesus. We might believe true things about God, we might have the dial set to “truth” based on the Bible but without the warmth of compassion, those truths won’t reflect the heart of God accurately, because God is compassionate. God’s work on our character will always be based on truth, but it will also include the warmth of compassion in applying those truths. Let’s look at three ways compassion makes all the difference in a church.

Turn with me to Mark chapter 3.

Again he [Jesus] entered the synagogue, and a man was there with a withered hand. 2 And they watched Jesus, to see whether he would heal him on the Sabbath, so that they might accuse him. 3 And he said to the man with the withered hand, “Come here.” 4 And he said to them, “Is it lawful on the Sabbath to do good or to do harm, to save life or to kill?” But they were silent. 5 And he looked around at them with anger, grieved at their hardness of heart, and said to the man, “Stretch out your hand.” He stretched it out, and his hand was restored. 6 The Pharisees went out and immediately held counsel with the Herodians against him, how to destroy him. Mark 3:1-6

Jesus and the Pharisees saw the same situation through very different eyes. The Pharisees had the dial set to “truth” – the Bible says to keep the Sabbath and by golly that’s what they were going to do and they were going to make sure everyone else kept the Sabbath too. So their eyes are fixed on the biblical commandments and whether or not Jesus was going to break the commandments.

You know what they didn’t see? A man who was suffering with a need. Jesus tried to turn their dial to compassion when he asked them “what does God really want on the Sabbath? Is it lawful to do good or to do harm, so save life or kill?” But their hearts were hard. Frozen. No compassion.

And here’s the ironic thing. If we don’t set the dial to compassion, we don’t end up with truth no matter how orthodox we try to be. Look at verse 6: they went out and planned how to kill Jesus. That was their answer to Jesus’ question: to them it wasn’t lawful to lift a finger to save life, but it was lawful to plan a murder. They’ve got it completely upside down. They were acting in the name of God, but they were missing God’s heart by a mile. They were acting in the name of Truth, but because their hearts were frozen cold, they were distorting the truth. To get truth right, we also need to set the dial to “compassion”.

8 In those days, when again a great crowd had gathered, and they had nothing to eat, he called his disciples to him and said to them, 2 “I have compassion on the crowd, because they have been with me now three days and have nothing to eat. 3 And if I send them away hungry to their homes, they will faint on the way. And some of them have come from far away.” 4 And his disciples answered him, “How can one feed these people with bread here in this desolate place?”

Jesus has compassion and wants to do something to meet the need. The disciples want to limit compassion to just feeling something: hey, we feel bad, but what can we do? Let’s send them away. Jesus pushes them past feeling to action: You give them something to eat. Don’t pass the buck, you do something! Let’s pick up in verse 5:

5 And he asked them, “How many loaves do you have?” They said, “Seven.” 6 And he directed the crowd to sit down on the ground. And he took the seven loaves, and having given thanks, he broke them and gave them to his disciples to set before the people; and they set them before the crowd.7 And they had a few small fish. And having blessed them, he said that these also should be set before them. 8 And they ate and were satisfied. And they took up the broken pieces left over, seven baskets full. 9 And there were about four thousand people.

To Jesus, compassion was a feeling that moved him to action. And he invited his disciples to join him in that action: you give them something to eat. And he’s still calling his followers to follow him in a life of compassion for others, including the poor, the hungry, the brokenhearted, the lonely, the marginalized, the oppressed, and most of all, those who don’t know the eternal hope only Jesus can give. Jesus calls us to follow him off the sidelines, off the “feeling but not doing” bleachers into the fray of human need. But let me warn you, you’ll probably encounter at least one of these four compassion-killing excuses:

Often we’ll feel inadequate for the situation. Kinda like the disciples did when Jesus said “you give them something to eat.” You’ll look at someone going through a hard time and you’ll feel like “I got nothing. I can’t meet their need.” Here’s where faith comes in: believe that Jesus can meet their need through you. It’s only as we give what we have to Jesus that he can break and multiply what we have and bless others with it.

This is true. Even Jesus couldn’t meet every need. He said he only did what his Father showed him to do. None of us can do everything, but we can all do something. Ask Jesus to give you eyes to see the needs he wants to use you to meet.

Opportunities to show compassion rarely come at convenient times. We see this in Jesus’ ministry: he’s exhausted and gets away to be alone for a time, but the crowds find him, and he has compassion on them. He’s on his way to offer compassion in the form of healing to a desperate dad when his trip is interrupted by a desperate woman who touches him for healing. Not convenient timing. He has Pharisees watching him like a hawk to see if he’s going to break the Sabbath – and there’s this guy with a withered hand. Why couldn’t this guy show up the day before or the day after?

A couple years ago someone called me all upset saying the church just doesn’t care enough. I asked what he meant. He said, So and so stopped coming to church a couple months ago and I don’t think anyone has even reached out to them! I assured him I’d missed them and reached out to them, but then I asked an obvious question, have you reached out to them? He hadn’t. I encouraged him to turn his concern into action and reach out to them.

Listen, those compassion-killing excuses…I’ve felt them all. At times I’ve given in to them and they’ve stopped me from acting on compassion. Expect them and don’t let them paralyze you. Step out with faith and loving compassion and see what God does.

I want to close by reminding us of our anchor verse for this series: Romans 8:29

29 For those whom he foreknew he also predestined to be conformed to the image of his Son, in order that he might be the firstborn among many brothers.

See legalism can turn this into being compassionate enough to earn God’s pleasure and we’ll always feel we’re falling short and not doing enough. Compassion isn’t something we do for God, it’s something God is doing in us. Just follow Jesus. It’s that simple. Follow Jesus. Everyday, let’s ask Jesus, help me follow you in the way of compassion today.

Let’s ask God to give us eyes to see people the way Jesus sees them, and then let’s look around. There are people all around us who are hurting, or who have needs, or are struggling with something, or are just lonely and could use a friend. Be ready to be that friend. And sometimes that someone will be you and you’ll want someone else to see you with eyes of compassion.

Let’s be that church, let’s turn the dial to “truth”, but let’s ask God to warm that truth up with compassion. 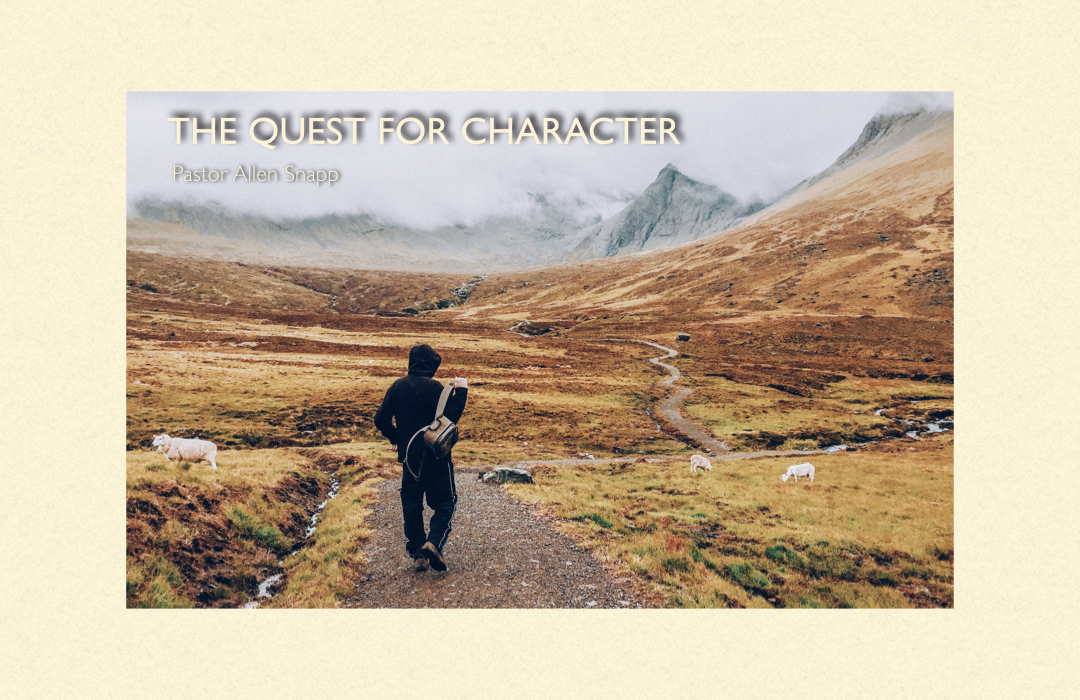 More in The Quest for Character

The Quest for Character - Humility

The Quest for Character: Authenticity

The Quest for Character: Perseverance