The Trouble with Achan

The Trouble with Achan

We are working our way through the book of Joshua, so please turn with me to chapter 7. Those of us who are older probably remember when the first three Star Wars movies hit the big screen (actually Episodes IV,V, and VI but first to come out). Do you remember the heartbreakingly sad ending in Episode VI – The Return of the Jedi - when Luke abandons Princess Leia and Hans Solo, played by Harrison Ford, is killed in a firefight with the Imperial force? Who could ever forget that tearjerker ending?

If that ending, with Hans Solo dying – really dying – doesn’t sound familiar to you, if you remember a happier ending to The Return of the Jedi it’s only because George Lucas overrode producer Gary Kurtz’ darker vision for the movie’s ending. Lucas knew audiences would want a happy ending and he gave it to them.

When we get to the end of Joshua 7, we don’t like the ending. We want to rewrite it and give it a happier ending, but we don’t have that option. This is not a happy chapter - it’s a sad chapter with a shocking ending, but it does convey to us incredibly important truth about God, mankind, judgment, and the high cost of secret sin. And in Christ we will be reminded that while there’s no happy ending to this chapter, there is a happy ending to the story for all those who believe in Jesus Christ. In the gospel, God rewrote the ending from eternal death to eternal life for all who place their trust in the Lord Jesus Christ. Keeping that hope in mind, let’s begin by reading the first verse.

There is a phrase in Hebrew – actually it’s one word: Charam and it means “devoted to destruction.” God told Joshua that when they took Jericho it was to be entirely devoted to destruction. In chapter 6:18 Joshua instructs his soldiers to “keep away from the devoted things, so that you will not bring about your own destruction by taking any of them. Otherwise you will make the camp of Israel liable to destruction and bring trouble on it.”

And they did just that: They devoted the city to the Lord and destroyed with the sword every living thing in it—men and women, young and old, cattle, sheep and donkeys. Vs 21

The chapter ends with Joshua pronouncing a curse over anyone who undertakes rebuilding Jericho, saying their firstborn son will die when they lay its foundations and their youngest child will die when they hang its gates. What’s up with this curse, and this idea of the city being devoted to destruction?

To understand we need to travel back in time four hundred years before Joshua. God told Abraham, “Your descendants will be strangers in a land that is not theirs, where they will be enslaved and oppressed four hundred years…. Then in the fourth generation they shall return here, for the iniquity of the Amorites is not yet complete.”

Four hundred years before Joshua, Canaan was already a wickedly despicable place. God could have judged it then, but He said their sin isn’t complete yet. God is patient and will sometimes allow a nation to grow more and more sinful before finally saying, “enough. It is time for judgment to fall.”

Jericho was a rotten, wicked city. They committed what was detestable in the eyes of the Lord. Perhaps the darkest evidence of their sin is that they would sacrifice their babies to Baal in the hopes of appeasing him. Sin can so rot a person and a people that God says, there’s nothing left here to redeem, it’s all contaminated, the only way to clean it is to destroy it. That was the state of Jericho. And Israel did completely destroy it…

Except the first verse of chapter 7 tells us something that no one else knows. The Jews don’t know it yet, Joshua doesn’t know it yet, but we let in on a secret: an Israelite named Achan took some of the items God told the Jews to destroy and hid them in his tent and because of that the Lord’s anger burned white hot against Israel. Only no one knows it yet.

After defeating Jericho, Joshua turns his eyes on the next city to conquer; a small city called Ai and this is going to be a breeze compared to Jericho. They decide to send just three thousand armies to dispatch this weak little city, but Ai defeats them and kills 36 of Joshua’s men.

That is devasting news to Joshua and his leaders. It’s not just losing 36 men. It’s that all the nations in Canaan will hear that Israel isn’t indestructible and will surround them to destroy them. Joshua desperately asks God, why is this happening? Why did You bring us here just to destroy us? We are going to be wiped off the face of the earth and then what will people say about You, God?

Think about how terrifying this process must have been for Achan as the noose kept getting tighter. But for some reason, he never comes forward to admit what he’d done. He lets this painful process go on and on until finally there was no place to hide.

As Achan is standing there exposed, Joshua appeals to his conscience: give glory to God and confess what you’ve done. Don’t hide it any longer! And Achan admits that when he saw the riches, he coveted them. He wanted them for himself, and so he took a Babylonian robe, some silver and some gold and hid them in the ground under his tent. Finally he takes them to his tent and they find what he had hidden.

The high cost of hidden sin

There is a warning in this story about secret sins. The first verse says Israel, through Achan’s act, “broke faith in regards to the devoted things.” The verb “broke faith” means to act under cover, to deal secretly, treacherously. All sin is serious but there are secret, treacherous sins that are particularly repugnant to God and whose consequences are that much more severe.

For a time Achan probably thought he got away with it. Even when the 36 soldiers died, more than likely he didn’t make a connection. But it does remind us that our lives and actions are connected to others in our sphere. When Adam and Eve disobeyed God’s command, sin and death entered mankind. God sees Israel as a community, which is why verse 1 says Israel “broke faith” when in reality it was Achan who broke faith. What one person did affected the entire community. God deals with us as a community.

One of the lies that sin whispers in our ears is it’s not hurting anyone else. But our sin does affect other people. When we “break faith” with secret, hidden sin we are never the only ones it hurts.

So let’s not believe the lie, it’s not hurting anyone. Yeah, it’s hurting someone.

Another of the lies sin whispers to us is no one will ever know. Secret sins, sins that we hide under our tents hoping no one ever finds out will one day be revealed – Jesus says nothing is hidden that will not be made manifest, nor is anything secret that will not be known and come to light. What Achan faced that day was a preview of the final Judgment Day when everything that is hidden under our tent will be exposed.

There’s a saying that there’s no better disinfectant than light and remembering that everything we hide in the secrecy of darkness will be brought into the light motivates us to disinfect our lives from the rot of sin. John writes about this in his first letter:

5 This is the message we have heard from him and proclaim to you, that God is light, and in him is no darkness at all. 6 If we say we have fellowship with him while we walk in darkness, we lie and do not practice the truth. 7 But if we walk in the light, as he is in the light, we have fellowship with one another, and the blood of Jesus his Son cleanses us from all sin. 8 If we say we have no sin, we deceive ourselves, and the truth is not in us. 9 If we confess our sins, he is faithful and just to forgive us our sins and to cleanse us from all unrighteousness. 1 John 1:5-9

Walking in the light doesn’t mean we never sin, it means digging up the sins under our tent and bringing them to God in honest confession and asking for His forgiveness. Verse 9 is an awesome promise from God: if we confess our sins (bring them out of the tent and into the light) He is faithful and just to forgive and cleanse us. When we walk in the light, the Holy Spirit gives us power to say “no” to ungodliness.

The final verses of chapter 7 are disturbing. It’s the sad ending I talked about.

This seems terribly unfair. Everything having to do with Achan – his children (who are probably grown, and may have been complicit or at least known what Achan was hiding), his livestock, and his wealth, including the items he had stolen were taken out to a ravine and he and his family and livestock were all stoned to death. Then everything was burned.

Because the passage says nothing about his wife, I think that maybe she had already passed away but we don’t know. How incredibly sad that this man’s sin meant death for his entire family. It doesn’t seem fair. But we need to keep two things in mind.

God hates sin – hates it with a ferocity we can’t even imagine. The Bible tells us that this entire world is devoted to destruction. One day God will burn away the heavens and earth with tremendous heat – eradicating everything about this stained, fallen, contaminated world.

We are all Achan to some degree – there’s something hidden in all of our tents. All of us have attached ourselves to despicable things that God intends to destroy. None of us could stand before God on Judgment Day. We were destined for an eternally tragic ending.

But God, out of His deep love for this world, the people in the world, you and me, wrote an alternative ending when He sent His Son Jesus to die on the cross in our place, paying the price for our sins and absorbing God’s fierce hatred of sin so that, unlike Achan and his family, our ending might be rewritten from devoted to destruction to destined for life.

If you have never given your life to Jesus, trusting him to save you from God’s judgment, the Bible says today is the day of salvation. Don’t wait another minute, ask Jesus to come into your life, wash you clean, and give you the free gift of eternal life. He’s already paid for it in full, you just need to believe in him and ask for it. Let’s pray. 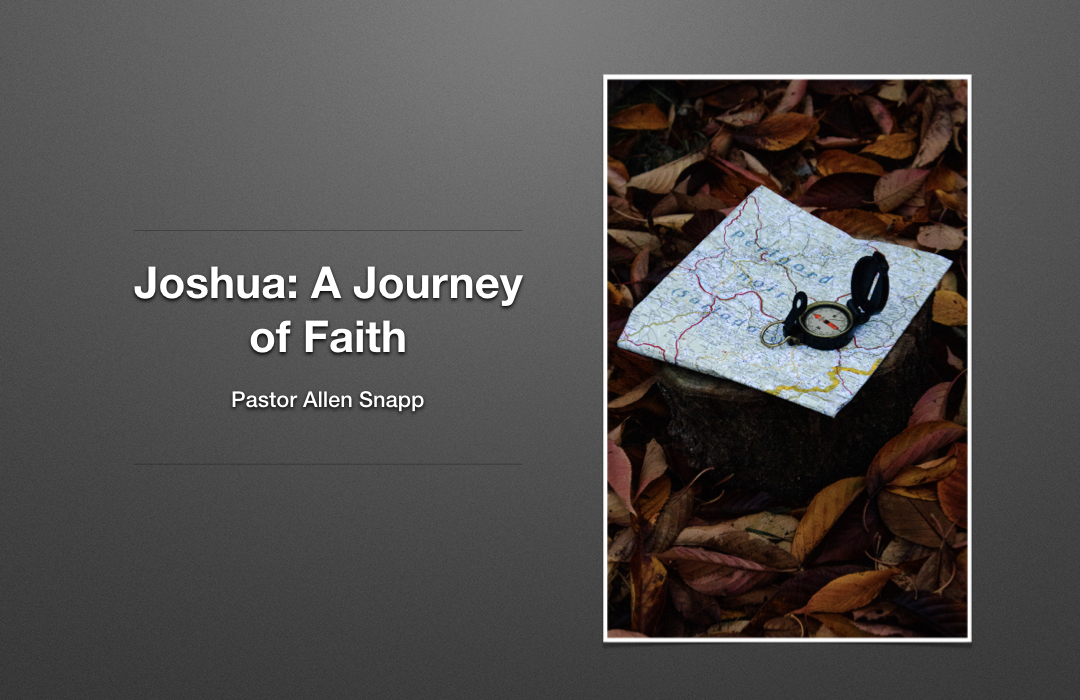 More in Joshua: A Journey of Faith

Is It Possible For God To Do the Impossible

Hearing the Right Message in Defeat