A Season of Promise

A Season of Promise

As we prepare for Christmas and the birth of our Savior, there are so many things we associate with this season. It’s the season where we put up Christmas trees, string Christmas lights, sing Christmas songs, watch Christmas movies, and of course, and take our Christmas lists and do our Christmas shopping. We might also associate busyness with the Christmas season and some degree of stress trying to figure out how to get everything done before December 25th.

If you’re like me, it’s easy for the deeper meaning of the season to get lost in all the to-do’s and busyness of the season. I find myself wanting to take some quiet moments to reflect on what it’s really all about. For the next several Sundays let’s hit the pause button, take a deep breath, and reflect on what the Bible says this season is about.

700 years before Jesus was born, Isaiah prophesied a promise. A promise from God. Let’s read it in Isaiah 9:2,6-7

If you’re a fan of the TV show The Office, you know that Dunder Mifflin Branch Manager Michael Scott is no stranger to painfully awkward moments. Cringeworthy is his middle name! Most of the time I find his antics hilarious, sometimes inappropriate, but there was one particular Office episode that I actually found painful to watch. It had humor in it, but the humor was overshadowed by the disappointment and pain Michael Scott caused. And it had to do with a broken promise.

Turns out, ten years earlier Michael Scott had promised a class of 3rd graders that if they graduated high school he would pay for their college education. They became known as “Scott’s Tots”. Newspaper articles were written about it. Every year they would send him hand-made cards. And these lower-income students held together, stuck to it, studied hard, and now, ten years later, were ready to graduate. All motivated by Michael Scott’s promise to fund their college education. And Michael Scott doesn’t have the money to pay for even one of them to go to college, much less the entire class.

Finally Michael can’t avoid it any longer, he has to go to the class and break the news to them. To watch them give him a hero’s welcome, sing a song they’d prepared lauding the man who made it possible for them to dream of a brighter future, and then watch him have to let them down, betray their trust, and break his promise – it was hard to watch.

When one of his colleagues asked why he ever made such a promise, he explained that he had fallen in love with these 3rd graders and didn’t want to see them fall victim to the system. He goes on to say, “I’ve made some empty promises in my life, but hands down this was the most generous.”

Promises are only worth something if they’re kept.

We’ve all experienced in one way or another the pain of someone breaking a promise to us. And we’ve all at some point broken a promise to someone else. The good news of the Christmas season is that…

God has given some massively generous promises – but they’re never, ever empty promises because God is always 100% true to His promises. In all of His eternal existence, God has never once broken a promise and He never will break a promise. If God promises it, you can depend on it.

Seven hundred years before Jesus was born, God promised he would be born:

6 For to us a child is born, to us a son is given; and the government shall be upon] his shoulder, and his name shall be called Wonderful Counselor, Mighty God, Everlasting Father, Prince of Peace. 7 Of the increase of his government and of peace there will be no end, on the throne of David and over his kingdom, to establish it and to uphold it with justice and with righteousness from this time forth and forevermore. The zeal of the Lord of hosts will do this.

This won’t happen for another 700 years but Isaiah begins by speaking of it in present tense: to us a child is born. Not will be born, is born. To us a son is given. Not will be born, IS born. Time has no bearing on God’s promises because as soon as God makes a promise, it’s done. So God can speak of future promises in present tense (I am doing this) or past tense (I have done this) because the moment God promises, it is as good as done.

We’ve seen this in the book of Joshua. God says to Joshua, I have given the land into your hand. Past tense. The first time God said that, Joshua hadn’t even set one foot in the land but God is saying He has given the land to Joshua. God’s promises are so sure, His promises are as good as done the moment He promises, even if its fulfillment is hundreds or thousands of years away.

God promises to give this world a child, a son, and the government shall be upon his shoulder. If the promise ended there, God could be speaking of the birth of an earthly king who would rule. That would be a good promise, but earthly rulers come and go, there wouldn’t be anything unusual about that. But God’s promise isn’t anywhere near done. Because God gives a massively generous promise about who this child would be, and what he would do.

And his name shall be called Wonderful Counselor, Mighty God, Everlasting Father, Prince of Peace. Vs. 6

In Bible days, a person’s name represented their character, their person. So this child’s character and person would be wonderful counselor (incredibly wise and perceptive). This is an invaluable trait that reminds us of how Jesus referred to the Holy Spirit as our counselor. This ruler would be able to guide us, counsel us, direct our lives and the affairs of humanity wisely, with piercing, accurate insight. That’s a great promise, but God’s not done.

His name shall be called…Mighty God. That promise escalated quickly! The Bible doesn’t call anyone Mighty God except the one true Mighty God. This child, this son given will be divine, will be God. Remember, the concept of the Trinity had not been revealed yet in Isaiah’s time. There are OT verses that intimate it, but it wouldn’t be until the NT that the nature of God as Trinity would be fully revealed.

But we see a glimpse of the Trinity in this promise: a child, a son is given by God and yet this child’s name will be Mighty God. God will give a child who will be God. We see this promise fulfilled in Jesus – he is the Son of God, the Second Person of the Trinity, fully God in every way (and fully man in every way).

But then we come to the most difficult title to understand: Everlasting Father. That confuses us – is Isaiah saying that Jesus is the first Person of the Trinity – the Father. The answer is no, Isaiah isn’t speaking in terms of the Trinity at all. He’s not saying Jesus the Son is the heavenly Father. But he is revealing something truly precious and comforting to our hearts this Christmas season.

First of all, consider the word everlasting. More than any other author in the Bible, Isaiah loves to speak of eternity. He speaks of God as “the One who is high and lifted up, who inhabits eternity, whose name is holy” (Isa. 57:15). This child will be everlasting. He will be the author of eternity, the father of time. This child who will enter time at a specific point in history, doesn’t relate to time the same way we do. He is everlasting – has always existed, will always exist. He will be born at a specific time, but he will be born everlasting, having always existed.

For some when you think of your father you think of someone who protected you, provided for your family, affirmed and supported you, cared for you, loved you, was there for you. To the degree that these words come to mind, your father succeeded at being a father and that promise kept will impact you all your life. Sadly, for others, the name father might evoke words like distant, absent, harsh, unloving, indifferent. To the degree that these words describe a father, that father has failed at being a father, and that broken promise can have a lifelong effect on you.

However, no matter what comes to mind when we think of our earthly father, we have this Christmas promise: Jesus is our perfect father as he perfectly reflects our heavenly Father’s heart towards us. Jesus will always be close to you, affirming you, loving you, protecting you, providing for you.

The great 19th century pastor Charles Spurgeon once said, “There is no unfathering Christ, and there is no unchilding us, He is everlastingly a father to those who trust in him.”

Of the increase of his government and of peace there will be no end, on the throne of David and over his kingdom, to establish it and to uphold it with justice and with righteousness from this time forth and forevermore.

It’s amazing how many of our problems or blessings come from the quality and nature of our government. Live in a dictatorship and your life could be a living hell. Many governments rule by fear – step out of line and you might disappear in the middle of the night. And there’s no power to counter them or hold them accountable.

We live in the freest country in the world. Yes, we have our problems and in my opinion our government has grown too big, but still we are so blessed to live in a country where we have freedom and protections over our freedoms. We take for granted so many blessings we enjoy living in this country because we grew up with them, and we might think everyone in the world has always enjoyed these same freedoms, but the reality is most people in the world, throughout history, have not enjoyed the freedoms we take for granted. Far from it.

At Christmastime we remember that God sent His Son Jesus to first establish the rule of God in the hearts of His people. And one day, Jesus will establish his earthly rule on earth, and it will be a perfect government presiding over perfect peace. Forever.

God gives massively generous promises about what this Son will be and what he will do. And God keeps His promises!

The more generous the promise, the emptier it is if it’s broken. The deeper the vow, the more painful the violation if they’re not kept. We live in a world of broken promises. But Christmas is a season of promises kept – God’s promises. Generous, massive, and never, ever broken promises. Every promise made by God will be kept. Jesus is the reason for the season, and he’s the promise of the season. We can trust him with all our hearts and rejoice that the biggest promises about our future won’t be empty promises, they will be kept promises. Let’s pray. 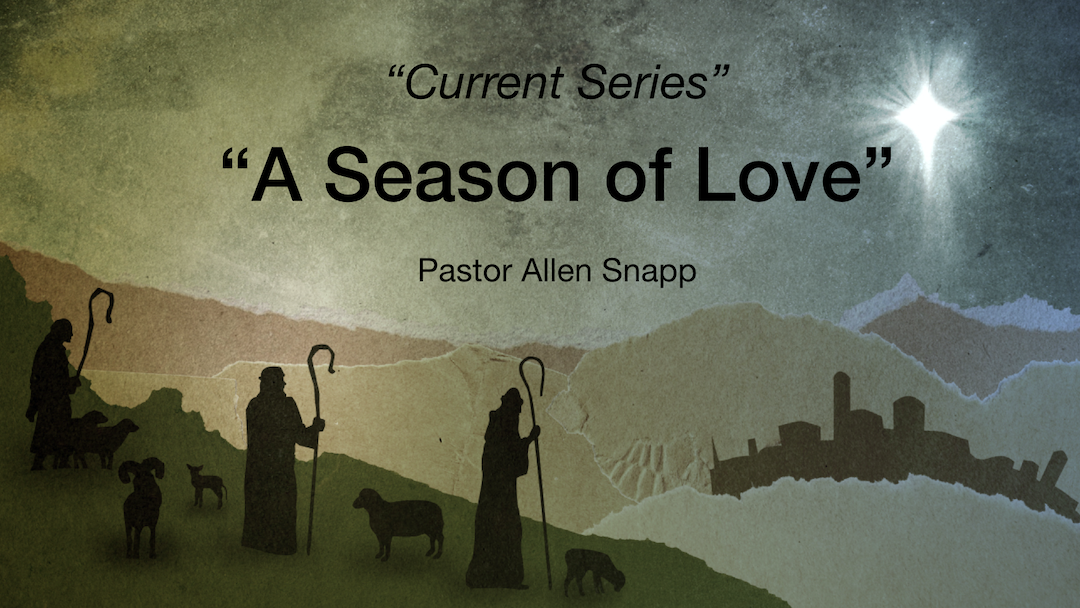 More in A Season of Love

A Season of Light

A Season of Peace