We began the service with the great hymn When I Survey the Wondrous Cross. Let’s take the next few moments to do that, to survey the wondrous cross and as we do, meditate about why something so horrible is so wondrous.

As Jesus hung on the cross in our place he experienced the broken relationships that sin inflicts on the world, both vertically and horizontally. Jesus’ vertical relationship with God was (for a brief time) broken. The Father so completely turned His face away from Jesus that Jesus cried out, “My God, my God, why have you forsaken me?” Jesus’ relationship with his heavenly Father was broken and he was abandoned by God, forsaken by God, as he hung on the cross.

But his horizontal relationships were also broken. His disciples abandoned him. One of them betrayed him, another denied him. The Roman soldiers and the Jewish leaders mocked him. He came to his own people and his own people rejected him. Jesus was truly alone on the cross, both vertically and horizontally.

Writing to Gentiles, Paul writes this in Eph. 2

13 But now in Christ Jesus you who once were far away have been brought near by the blood of Christ.14 For he himself is our peace, who has made the two groups one and has destroyed the barrier, the dividing wall of hostility, 15 by setting aside in his flesh the law with its commands and regulations. His purpose was to create in himself one new humanity out of the two, thus making peace, 16 and in one body to reconcile both of them to God through the cross, by which he put to death their hostility.

The Jews broke down all humanity into two groups: Jew and Gentile. Jesus destroyed the walls of hostility that separated and divided humanity, making peace between us (horizontal) by reconciling us all to God (vertical) by the cross.

When we survey the wondrous cross we see Jesus being abandoned by God and man, suffering an alone-ness deeper than anything we can imagine, so that mankind could be reconciled to God and to one another.

In Christ we are loved by God, members of His family, and brothers and sisters to one another. Let’s live in the goodness of his work by drawing near to God as our Father and by loving one another.

As we continue to stand at the foot of the cross, the next thing we might notice is all the blood pouring from Jesus and down the cross. Whatever you might think of Mel Gibson’s movie The Passion of the Christ, one thing I think he got right was that Calvary was a bloody, bloody place. Jesus’ back and legs would have been torn up like meat from the 39 lashes he suffered. His head would have bled profusely from the crown of thorns the soldiers mockingly placed on his head. If you’ve ever had a head injury you know that even a minor head injury bleeds a lot. As those long thorns were pressed into Jesus head, the blood flowed freely.

Then the nails were hammered into his hands and feet and blood poured out all over the cross. Finally, a soldier rammed his spear into Jesus’ heart and water and blood flowed out. The cross was a bloody place.

Heb. 9:22 says, without the shedding of blood there is no forgiveness of sins.

The gospel isn’t just that Jesus died for us. It wouldn’t have worked for him to have been poisoned or electrocuted or drowned for our sins. For forgiveness to flow blood had to flow.

Some critics of Christianity equate the cross to cosmic child abuse: God the Father abusing His Son Jesus. They act as if God said, I think I’m going to torture my Son in order to make a way for people to get saved.

What they don’t realize is, there was no other way God could have saved us. Jesus prayed in the garden of Gethsemane, Father, if there is any other way let this cup (the crucifixion) pass from me.

No other agency in heaven or earth could wash us clean of our sins. Jesus must suffer and die, his blood must flow profusely over the cross, dripping down to the earth, for man to be saved. There was no other way, even for God, to save us from our sins.

One reason is because God is just. He can’t not be just, it’s impossible for God not to be just, and sin must be punished. God would cease to be God if He just ignored sin or didn’t punish sin appropriately.

Jesus’ blood was so precious in God’s eyes that it more than paid for all our sin. Jesus accepting the punishment that belonged to us more than satisfied God’s justice and made it possible for God to forgive us our sin and still be righteous.

But if we walk in the light, as he is in the light, we have fellowship with one another, and the blood of Jesus his Son cleanses us from all sin. 1 John 1:7

As we survey the wondrous cross, it speaks two more things loudly to us:

God loves us incredibly for Him to give up His Son to such a horrible death in order to save us. The cross speaks of God’s love for you and for me.

And, there is nothing we can bring to God or do for God to wash clean our sins. No amount of good

works or religious zeal can wash us clean. Legalism has no power to cover our sins. None.

So don’t even try to do things to get God to forgive you or love you. Trust in Jesus’ blood alone because in all the universe only that blood pouring down that cross is able to wash us clean.

That’s the power of Jesus’ blood. That’s the wonder of the cross. 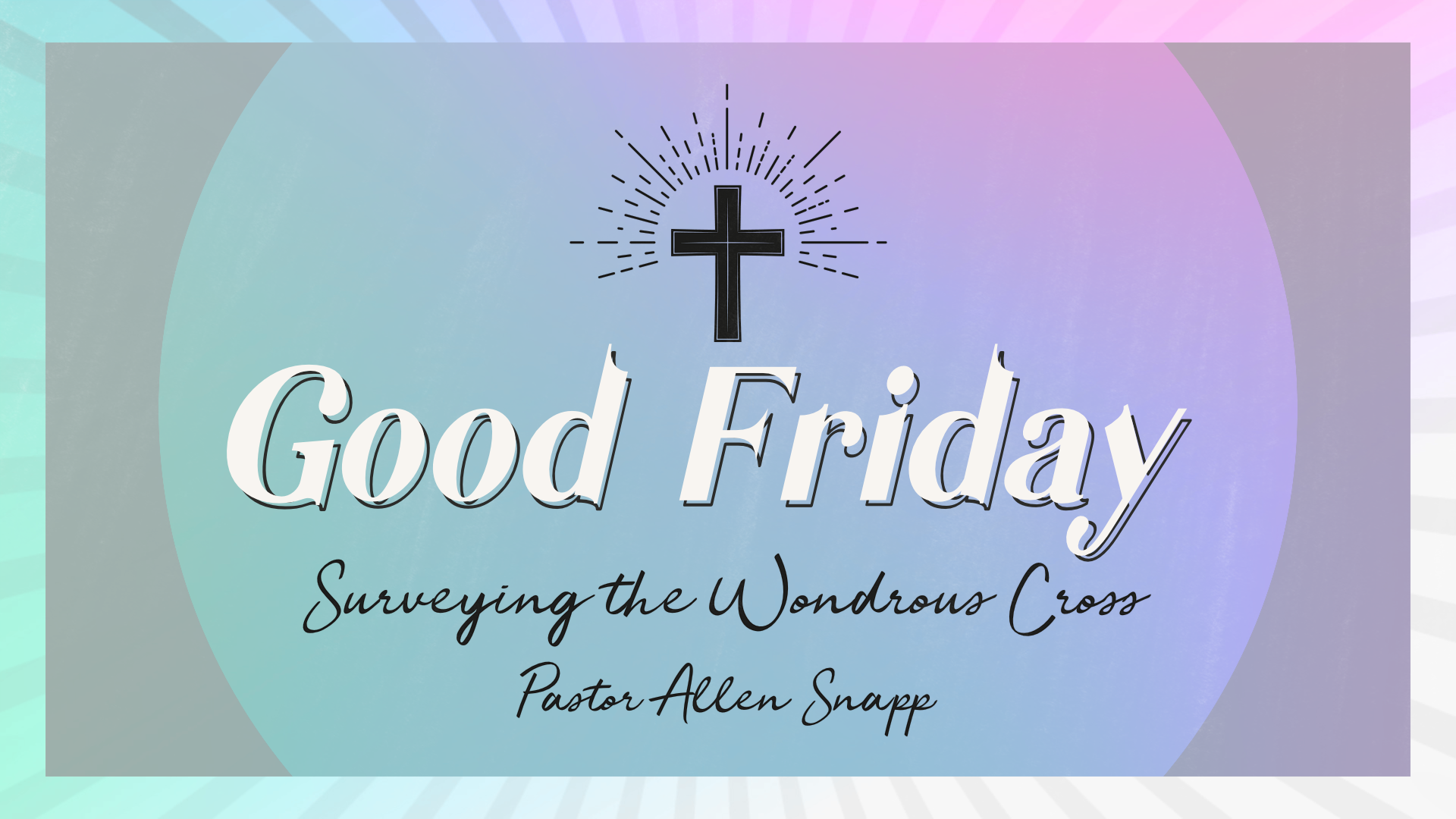